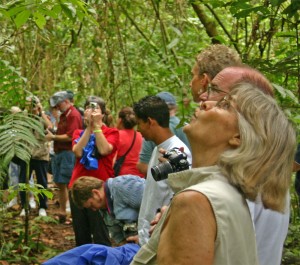 Travel is not mere recreation but an important learning activity, impacting the mind in a way that no other activity can quite achieve. The MG Program Office offers selected garden or horticultural educational tours to various destinations. These travel study programs are an immersion in learning about the plants, insects, animals, ecology, biodiversity, geography and history of the locations visited. It’s one thing to read about plants and ecosystems but nothing matches the benefit of directly experiencing those subjects on the spot. Seeing plants in habitat provides a better appreciation for how they grow and an opportunity to compare the ways plants (and animals) adapt to various environmental constraints. These lessons help us understand not only the ecology of other habitats, but often give us a different perspective on growing plants in our own temperate conditions.

Offered annually, the primary objectives of this study tour are to provide participants with the opportunity to experience global horticulture and tropical horticulture production systems, and gain a new perspective on how the economy in another country and culture faces the issues of a global society. Costa Rica is considered a third-world country, but has a higher standard of living than most other Central and Latin American countries. Despite its size, it is an extremely varied country, ranging from dry deciduous forests and open cattle country to lush tropical rainforest on the Pacific side of the central mountains and lowland flooded forests on the Caribbean side. The mountains that run along the center of the country have active volcanoes and cloud forests. The Central Valley, where the capitol of San Jose is located, is a fertile plain surrounded by mountains. The difficulties of farming steep slopes or waterlogged areas and the inaccessibility of other locations have saved a considerable amount of natural habitat, which is now preserved in 26 National Parks (that cover 11% of the country) and numerous private reserves and buffer zones that together protect more than a quarter of the entire country. The unique geography of the area has created a range of habitats that resulted in an incredibly rich diversity of flora and fauna – well over 10,000 species of vascular plants have been described in this country; orchids account for about 1,300 of those and almost 2,000 tree species have been recorded. Annual trips to this fascinating country visit different locations for a variety of experiences in different habitats and locations.

See the registration brochure for the 2019 tour to Costa Rica.

South Africa is one of the most diverse and enchanting countries in the world. Exotic combinations of landscapes, people, history and culture offer the traveler a unique and inspiring experience. The first MG trip to this fascinating location was offered in fall 2010, visiting several habitats to view unique plants in their native environment, as well as in gardens, in both the eastern and western parts of the country.

The last educational study tour was September 18 – October 3, 2013.  The tour was primarily in the western part of the country, including parts of the Garden Route, the Western Cape and Namaqualand. It visited the Cape Floral Kingdom, the oldest, smallest and richest plant kingdom in the world and the only floral kingdom to be contained within one country. Over 9,600 species of plants occur here on only 0.04% of the earth’s land surface, and about 70% are endemic, so there was a plethora of exciting floral attractions throughout this tour! Tour also included a full day safari in Kruger National Park and another day driving the Panorama Route of the Northern Drakensburg.

Tours in 2005 and 2008 visited many public and private gardens on the 2 week tour that went from subtropical Auckland on the North Island to the spectacular vistas of the snow-capped mountains of the South Island. Botanic Gardens in Auckland, Hamilton, Wellington, Dunedin and Christchurch, and Otari Wilton’s Bush Native Botanic Garden in Wellington, as well as several private gardens, were included. Additional stops were the gannet colonies at Murawai Beach, glowworm caves, a Maori cultural show, and in 2008, a trip to Doubtful Sound.

The last educational study tour to New Zealand was February 26 – March 11, 2014. This tour visited several gardens in the Auckland area, then spent most of the time on the South Island. Highlights included overnight stays at Larnach Castle Lodge and an overnight cruise on remote Doubtful Sound. This trip was timed to coincide with the Ellerslie Flower Show in Christchurch.