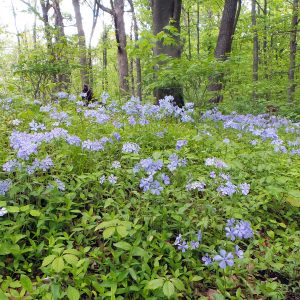 Woodland phlox in habitat in a maple woods in southern Wisconsin.

Woodland phlox, Phlox divaricata, is an eastern North American native increasingly offered as an ornamental to use in cultivated gardens for its attractive bluish flowers. This herbaceous perennial in the phlox family (Polemoniaceae) can be found growing in dappled shade in open woods, partially shaded meadows, and along stream banks from Quebec to Florida and west to Texas and the Rockies. This plant, also sometimes is referred to by other common names including blue phlox, Louisiana phlox, wild blue phlox and wild sweet William, is hardy in zones 3 to 8. It is taller and has a more open habit than the very common, sun-loving creeping phlox or moss (P. subulata) and does not spread as quickly as that species does. Another woodland species, P. stolonifera (also called creeping phlox), is much shorter at only 6-8 inches tall, forms dense clumps, has oval leaves and fewer lavender to pink blooms in the flower clusters, and is only hardy to zone 5.

Woodland phlox grows from a shallow root system, slowly spreading over time (divaricata means “with a spreading and straggling habit”). This is one of the only Phlox spp. to have both fertile (flowering) and infertile (non-flowering) shoots. The root system produces stolons which develop into non-flowering shoots as it forms a loose mat of foliage up to a foot high. Stems are hairy and sticky (from glandular hairs) with opposite, sessile, hairy, lance-shaped to elliptic leaves up to 2” long with entire margins arranged in widely spaced pairs. The leafy shoots will root at the nodes if they flop onto the ground, which increases the spread of the colony. The mostly unbranched flowering stems tend to be longer (to 15 inches tall) and more densely hairy than the infertile shoots, and the leaves on the infertile shoots are generally wider with more rounded tips and less hairy. The flowering stems die back after seeds are produced, leaving a rounded mound of semi-evergreen (in mild climates) dark green foliage to produce and store energy for the development of the following year’s flowering shoots. When not in bloom the plant is fairly nondescript and particularly as it begins to decline in summer could be mistaken for a weed.

For about a month in late spring to early summer plants produce loose clusters of salverform flowers at the stem tips. Each tubular flower, 1-1½ inches wide, has five flat, petal-like lobes at the end and a hairy green or reddish green calyx with 5 linear teeth. The spreading lobes may be notched (subspecies divaricata, generally in the eastern part of the range) or entire (subspecies laphamii, generally in the western part of the range). There are five stamens and a single pistil recessed inside the narrow corolla throat so are not readily visible. The sweetly fragrant flowers come in shades of blue from pale lavender to violet-blue, and occasionally pastel pink or white. The showy flowers attract butterflies, moths, bees, and flies.

Flowers are produced in loose clusters (L two) from furled buds (LC) and may be various colors (R three).

The flowers (which require cross-pollination to produce seed) are only pollinated by long-tongued insects including butterflies (especially tiger swallowtails), skippers, hummingbird clearwing and sphinx moths, and bumblebees which are able to reach the nectar produced at the base of the long tube, but the flowers are visited by many other insects that feed on the pollen produced near the end of the tube. Flowers may be followed by rounded fruits that start out green and eventually dry to brown ovoid seed capsules that eventually split to release several small black seeds. This plant will self-sow but it is not aggressive and unwanted seedlings are easily pulled up or transplanted.

After flowering the petals are shed (L) and if pollinated a capsule is produced (LC) with each of the small capsules (RC) eventually splitting to release the small black seeds (R). 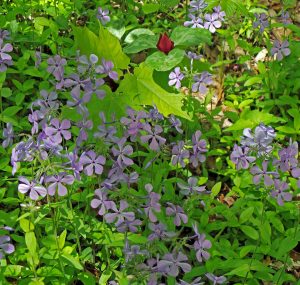 Phlox divaricata in a woodland garden with red trillium.

Use woodland phlox in native woodland gardens, naturalized areas, or the front of informal borders and in shady rock gardens. Interplant with early spring bulbs to help disguise the senescing bulb foliage. Use along a path or near a window where the lovely scent can be appreciated when they are in bloom. This species can be used as a loose ground cover but is not dense enough to outcompete most weeds. It goes well with earlier-blooming spring woodland ephemerals such as bellwort, bloodroot, Jack in the Pulpit (Arisema spp.), and trilliums. Combine it with other shade-loving plants such as small to medium hostas, astilbes, bleeding heart, columbines, hellebores, heucheras, lungwort and ferns where it will spread in and around the other plants, then fade into the background after flowering. 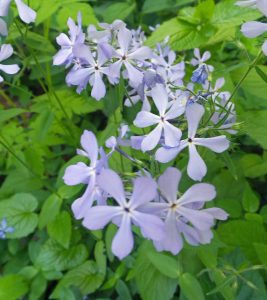 As its common name suggests, woodland phlox does best in woodland conditions in partial shade and rich, moist, well-drained soils. It is very adaptable and will tolerate dry and clay soils and is even drought tolerant once established. Although partial shade is best, it will tolerate full sun in cooler climates. Mulch lightly to retain moisture and keep the roots cool through the summer. Prune after flowering if desired to tidy the plant’s appearance but wait until spring to clean up the clump, only removing winter-damaged foliage. This plant has few pest problems, other than powdery mildew. Placing in areas with good air circulation and cutting the stems back after bloom can help reduce powdery mildew. Spider mites can be a problem in hot, dry weather. Deer and rabbits will browse the foliage.

Several cultivars are available including: