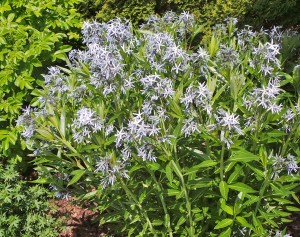 There are several species of Amsonia, all herbaceous perennials in the dogbane family (Apocynaceae), grown as garden ornamentals with the common name of called bluestar (including A. hubrectii). A. tabernamontana – with various common names including willowleaf bluestar, willow amsonia, blue dogbane, blue star-willow, eastern bluestar, and woodland bluestar – is native to the southeastern US, from Texas to Florida and up to southern Missouri and Illinois to southern New York. Found naturally in open woods, borders of streams, limestone glades, and moist sandy meadows, this long-lived plant is hardy in zones 3 to 9. It was chosen by the American Horticultural Society as one of the 75 Great Plants for American Gardens.

Willowleaf bluestar emerges in early spring from a taproot. The multi-stemmed clumps that grow 2 to 3 feet tall and wide have a bushy appearance. The smooth, erect stems usually branch and are crowded from the base to the tips with alternate leaves. The hairless lance-shaped leaves are long and narrow (up to 6 inches long) like a willow leaf, with a slender petiole up to an inch long, smooth margins and pointed tips. The lower leaf surface is paler than the bright green upper surface.

Willowleaf bluestar emerges in spring (L), with stems crowded with leaves (LC) to form a clump (RC). The lance-shaped leaves are long and narrow like a willow leaf (R). 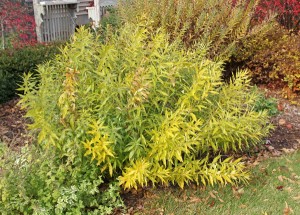 The foliage may develop a golden color in the fall. After the leaves fall off, the fibrous stems bleach to a silver color. Both the leaves and stems exude a toxic white latex when cut or damaged. 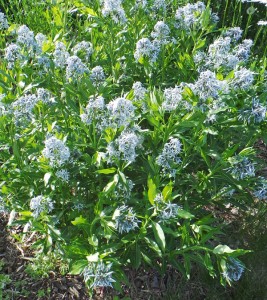 Plants bloom for 3-4 weeks in mid-spring to early summer, with many small, pale blue, star-shaped blossoms in loose terminal clusters (branched, flat to pyramidal cymes). Each ¾ inch wide flower has a tubular corolla with 5 spreading lobes that narrow to a point at the tips. The throat of the corolla has a ring of inward-facing white hairs, presumably to keep out ants and other insects that might rob the nectar without pollinating the flowers. Flowers may be visited by ruby-throated hummingbird, carpenter bees and other bees, hummingbird moths (Hemaris spp.), and various butterflies. They last very well as cut flowers.

Each pollinated flowers is followed by a pair of erect, cylindrical seed pods 4 to 6 inches long. These follicles each contain a single row of 8-10 seeds. The follicles split along the side to release the cylindrical, dark brown, ridged seeds. Deadhead after flowering to prevent self-seeding and to improve the plant’s appearance (once mature, the heavy seed pods can cause the stems to bend over or flop). Stems can be cut back by a third or half, or just the developing seedpods removed.

Flowers are followed by clusters of seed pods (L) that eventually split to release the seeds (C). The heavy seed pods cause the plant to flop (R), so are best deadheaded to improve the plants appearance and reduce reseeding. 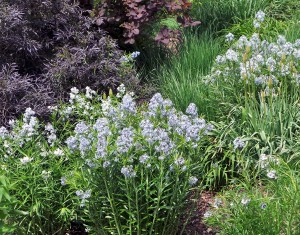 Willowleaf bluestar combines well with other perennials or with shrubs in a mixed border.

Use willowleaf bluestar in perennial beds and borders where it’s dense but finely textured foliage and mounded form will form a backdrop for other plants after it is done blooming in spring. It can be used as a specimen or in masses in both formal and informal settings. Try combining it with Siberian iris, butterfly weed (Asclepias tuberosa), daylilies, dark-colored heucheras, hardy mums, and tall, fall-blooming sedums in beds or borders. It works well in native plant gardens, especially on the edge of woodland gardens, where it mixes well with ferns, bleeding heart, and sedges (Carex spp.). 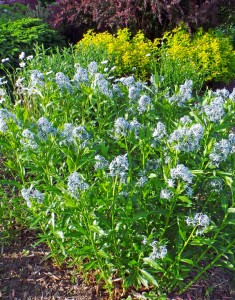 Grow Amsonia tabernaemontana in full sun and avoid over-fertilization to keep the plants from flopping.

Willowleaf bluestar grows best in full sun but tolerates partial shade (although it may not flower as well in any shade). Although it prefers moist, loamy soil, this plant can be grown in most soils, tolerating clay soils very well. Once established it is drought resistant. Plants grown in the shade in rich soils may require staking or pruning to keep them from flopping; this is rarely necessary when grown in full sun. Pruning will promote bushier growth and a more rounded form. Wear gloves when pruning because the white latex in the foliage can irritate sensitive skin. Over-fertilization will result in an open, floppy habit. The stems can be cut down in fall, or left over the winter (they will fall down under snow). 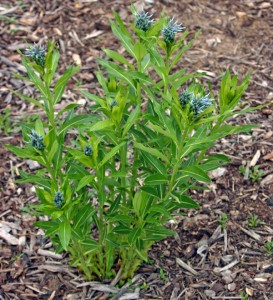 Young seedlings are easy to transplant and will flower in 2-3 years.

Willowleaf bluestar has few pest problems and is not favored by deer because of the latex in the foliage. It is easily propagated by seed, requiring 4 to 6 weeks of moist stratification for good germination. Volunteer seedlings are easy to transplant when very small (but the taproot makes this difficult later on). Seedlings will flower in 2-3 years. It can also be propagated by division of the crowns of established clumps in early spring or fall but clumps do not require division frequently and the tough, crowded roots are hard to dig up. 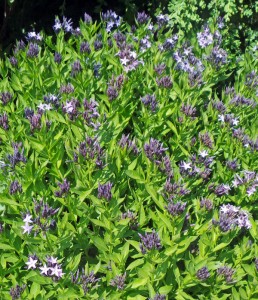 The cultivar ‘Blue Ice’ is usually listed as A. tabernaemontana, but it may be a hybrid with another species. This plant has larger, darker, lavender blue flowers in smaller clusters, is more compact (1-2 feet tall and 2 feet wide) and is only hardy in zones 4-9.