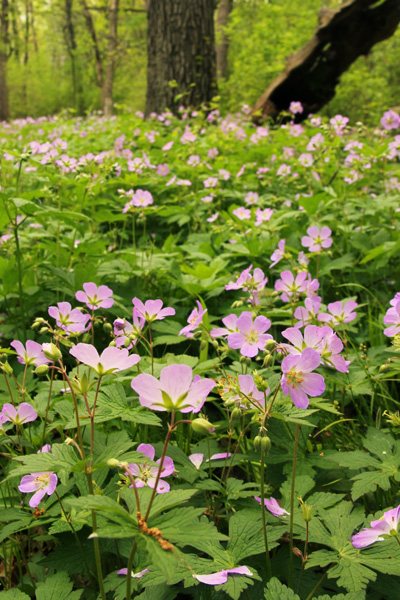 Geranium maculatum is an herbaceous perennial native to deciduous woodlands of eastern North America, from southern Ontario south to Georgia and west to eastern Oklahoma and the eastern part of the Dakotas in zones 3 to 8. It is found in most of Wisconsin except for a few of the northern counties. Wild geranium is the showiest of the native geraniums with larger flowers than the other species. Known by many different common names including alum root, alum bloom, cranesbill, spotted cranesbill, wild cranesbill, spotted geranium, wild geranium, wood geranium, and other local colloquial names, this clump-forming plant in the geranium family (Geraniaceae) is usually very abundant in dense patches in natural woodland openings. 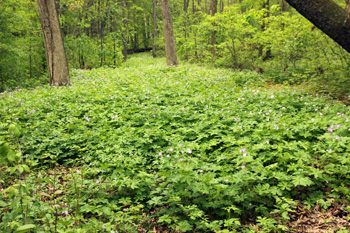 An extensive colony of wild geranium.

These colonies are formed of groups of long-lived clones that have grown from individual plants. It is not an effective colonizer and is rarely found in disturbed areas. G. maculatum was used medicinally by Native Americans to treat diarrhea and open sores or wounds.

Plants have a loose cluster of basal leaves and flowering stems arising from thick, branched horizontal rhizomes. They form a mound of dark green foliage 12-28 inches tall and spreading 12-18 inches.

A palmately lobed leaf (L) and clump of leaves (R). 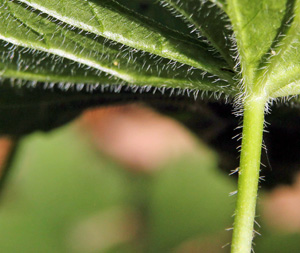 The underside of the leaf is covered with coarse hairs.

The palmately lobed basal leaves emerge in spring on long petioles with coarse white hairs. Each broad leaf up to 6 inches across generally has five deep lobes, although sometimes two of the lobes are deeply cleft enough to appear as seven lobes. The leaf margin is irregularly and coarsely toothed or cleft all around. The lower leaf surface has coarse white hairs like those on the petiole while the upper surface is covered with fine white hairs. 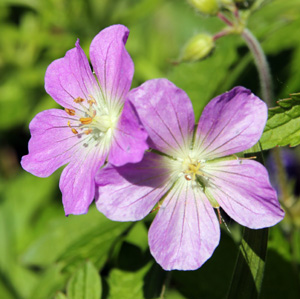 Wild geranium blooms over a period of about a month (sometimes longer in cooler weather) in late spring to early summer. Flower buds are set the previous year, enclosed in the winter bud at the tips of the rhizomes. Each upright, primarily unbranched flower stem has a pair of opposite, short-stalked stem leaves that are similar to, but smaller than, the basal leaves, usually with just three lobes. The upturned flowers are borne at the top of hairy stems in loose clusters of 2-5 (a corymb or floppy umbel). Each 1-1½ inch wide flower has five rounded petals, five green sepals and ten yellow stamens surrounding the single pistil with five carpels. The petals are generally rose-pink to lavender but may be darker purple or rarely white, with fine, slightly darker-colored lines running along their length that function as nectar guides. Honeybees, bumblebees, many types of native solitary bees, and syrphid flies are most common pollinators, although ants and beetles also visit the flowers.

After blooming, distinctive fruit capsules are produced 3-5 weeks later. Each consists of a long, central beak-like column (resembling a crane’s head) and five basal cells, each containing one seed with a reticulated surface.

After flowering (L), and the distinctive seed capsules (C and R).

The carpels of this dehiscent fruit curl upward and backward to spring open when ripe, expelling the seeds 10-30 feet from the mother plant. In summer, after the seeds have ripened, the plants may start to go dormant. Under good conditions leaves will remain green throughout the season, but the foliage may yellow or go summer dormant if the soil dries out.

Seed capsules expanding (L), ripening (LC), with the carpels curled back after seed dehiscence (C and RC) and the small black seeds (R).

Although a native plant in our area, wild geranium is easily cultivated and can be grown as an ornamental plant in gardens. Plant it in rich soil with plenty of organic matter in full sun or light shade and provide plenty of moisture for the best growth. Plants flower more prolifically the more sun they receive. This species will naturalize under optimum growing situations but is never invasive. It requires little maintenance. Deadheading is not recommended as plants do not normally repeat bloom. 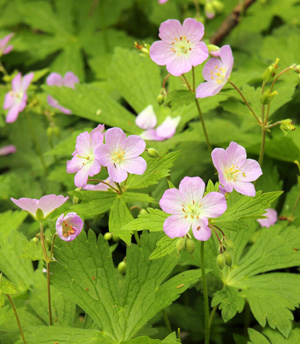 Wild geranium combines well with many shade-loving ephemerals and perennials.

The foliage can be lightly sheared back and shaped after flowering. This plant has few pests, although aphids and slugs may infest plants and rust and leaf spot may occur. Deer will eat the flowers (and occasionally the foliage).

There are a few cultivars of G. maculatum available:

Wild geranium is propagated from divisions of the rhizomes or from seed. Divide roots in in early spring or fall, cutting them where they form right angles. Seed can be purchased or collected in the wild. Because the fruits are dehiscent, they should be collected before splitting open (as they begin to darken, about a month after flowering) and kept in a paper bag to contain the seeds when the fruits explode open. Seed must be stratified in order to germinate, with higher germination rates the longer the cold period. Sowing outdoors in the fall is the easiest with no artificial stratification needed. In the wild young plants bloom in their second or third year but when grown in a garden often will bloom in the first year.