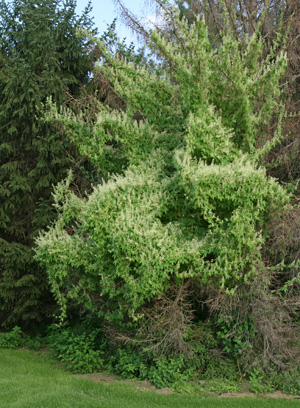 In late summer you may notice trees or shrubs festooned with crowns of white flowers that obviously are not the woody plant blooming. Look closely and you’ll notice the leaves and individual flowers look just like that of cucumber – this is wild cucumber or balsam-apple, Echinocystis lobata. The name Echinocystis comes from the Greek echinos for “hedgehog” and cystis for “bladder”, appropriately describing the spiny fruit.

A vining native annual in the cucumber or gourd family (Cucurbitaceae), wild cucumber is often overlooked until it is large and sometimes has engulfed the other plants it is growing on. It occurs throughout much of North America, including all of Wisconsin. Its native habitat is along streambeds, swamps, and moist thickets or roadsides. 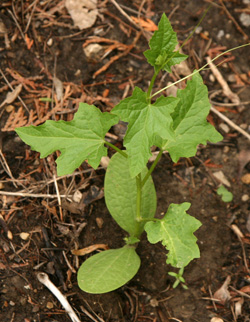 It is not common in home landscapes but will occasionally be spread from adjacent rural areas.

As a fast-growing, warm season annual, wild cucumber grows from seed each year, germinating after the last frost. The large, oval cotyledons look just like that of a regular cucumber. The smooth, fleshy stems are grooved lengthwise. The large, alternate leaves are palmate with 3-5 pointed lobes. Each is borne on a long petiole. The branching vines can grow up to 25 or 30 feet long, climbing onto other foliage with curling, 3-forked tendrils that arise from the leaf axils. The tendrils coil when they touch anything to attach onto for support. 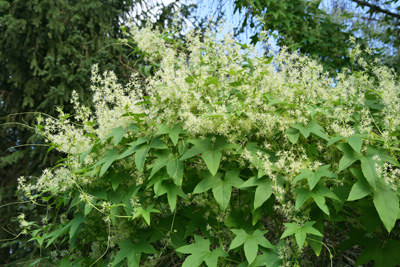 Starting in mid-summer the vines begin to produce fragrant, pale yellowish-white flowers. The plants are monoecious (separate male and female flowers are produced on the same plant) and the flowers are pollinated by insects. The numerous male flowers form in clusters on a long, erect raceme from the leaf axils. Each ½ – ¾ inch wide flower has 6 long, thin petals, giving a star-like appearance. The filaments of the three stamens form a column, with the yellow anthers on the end. The female flowers occur singly or in pairs interspersed among the male flowers, with a small, rounded spiny ovary below the yellow-green petals.

The male flowers are produced in large racemes (L), with each flower having 6 long, thin petals (R).

Superficially the fruit resembles a small and rounded cultivated cucumber, but with prickles all over it. The puffy, spherical to oblong, green pods with long, soft spines grow up to two inches long. Despite the common name, the fruits are not edible and can cause burning reactions in some people. The pods can be used in dried flower arrangements.

Female flowers have a prickly ovary beneath the petals, which quickly develops into the spiny fruit.

When ripe, the fruit becomes dry and brown and the inflated capsules burst open at the bottom to eject the seeds. Each pod contains four large, flat black or brown seeds, two in each of the two cavities in the pod. The fruits should be bagged well before maturity if you wish to collect seed, as they are forcibly expelled by hydrostatic pressure as soon as the pods are dry.

The mature fruits (L) dry out (C) and expel the dark brown or black seeds (R). 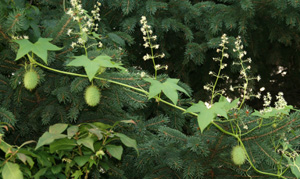 Wild cucumber can look like strings of green Chinese lanterns hanging in a tree.

Wild cucumber can be cultivated as an ornamental annual vine and would be great for covering arbors and pergolas, or for rambling horizontally along fences, walls and other low structures. It does best in full sun and rich, moist soil. Seed can be sown directly outdoors as soon as the soil warms or seeds can be started early indoors to be transplanted outside after the last frost. Only a few suppliers offer seed, so you may have to collect your own seed in the fall to grow the following year. 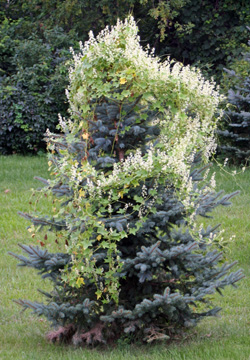 Wild cucumber is an aggressive vine that can nearly smother small trees.

Even though this is an attractive native plant, it is generally considered a weed when climbing on planted trees because of its aggressive growth. It is easily controlled in the home landscape by pulling or hoeing the young plants. Plants will self-seed readily, so controlling before the plants begin to flower and fruit is important for reducing infestations. Chemical control can be used over larger areas, such as shelter belts.