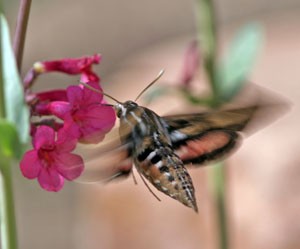 The white-lined sphinx moth, Hyles lineata, is a common sphingid moth that occurs throughout most of North America, from southern Canada down to Central America. It does not survive our harsh winters but moves up from the south most springs. Moths first appear in mid-May and a second flight occurs in late August to September, although abundance varies from year to year. Larvae can occasionally occur in tremendous numbers and can move in hordes in search of food, consuming entire plants and covering roadways in slick masses. Such explosive outbreaks, especially common in the dry country of the west, provide moths that emigrate to colonize more northern areas. There are normally at least two generations per year, with multiple generations in warmer climates. 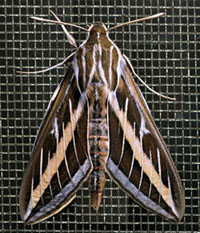 This is a large, stout-bodied moth with a furry brown body crossed by six white stripes. It has long, narrow, triangular forewings and shorter hindwings, with a wingspan of 2½ to 3½ inches. Each dark olive brown-colored forewing has a broad tan band going from the base to the tip of the wing, crossed by a series of thin white stripes along the wing veins. The black hindwings are bright reddish-pink in the middle.

The adults are primarily nocturnal fliers but are sometimes seen during the day, too. With their large, plump bodies and relatively small wing surfaces, they must beat their wings very fast, compared to butterflies, in order to stay aloft. By beating their wings rapidly, these agile fliers are able to hover like a hummingbird in mid-air. 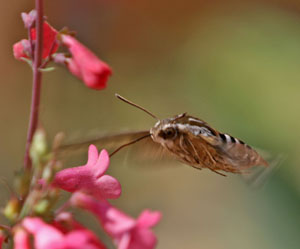 A white-lined sphinx moth hovers to take nectar from penstemon flowers with its long proboscis.

In poor light they can easily be mistaken for hummingbirds as they hover at tubular flowers, sipping nectar with a long proboscis. They are especially attracted to scented flowers. When flying during the day they like brightly colored flowers but in the evening, they prefer white or pale-colored flowers which are easier to see in the dark in contrast against green foliage. Some flowers they frequent include cardinal flower (Lobelia cardinalis), columbine, evening primrose, honeysuckle, hosta, Jimson weed (Datura meteloides), lilac, penstemon, petunia, and phlox. They may also be seen resting on buildings after being attracted to a bright light at night. 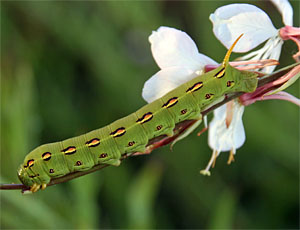 Adult females lay their eggs on plants in the spring, with each female capable of producing hundreds of eggs. The resulting larvae feed on plant leaves. The caterpillars are quite variable in color but all have a pointed horn at the back end. This horn may be yellow or orange, sometimes with a black tip. This is not a stinger and the caterpillar is harmless to humans. The typical Midwestern color morph is green (dark to lime green) with a series of black lengthwise stripes along with yellow and orange or pink dots. The extent and intensity of the stripes and spots varies among individuals. 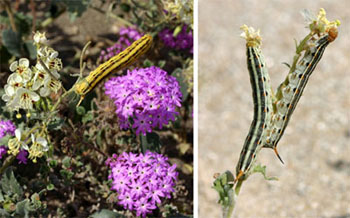 Western individuals are often a dull yellow or cream color and dark forms may be brown to nearly black. The head, prothoracic shield and anal plate are all the same color, either green or orange, with small black dots. Depending on the host plant, the insects may blend in very well with their surrounding and not be conspicuous until quite large. In our area they tend to be most noticeable in July and August, especially when full grown and searching for a place to pupate. The larvae develop through 5 instars, growing up to 3½ inches long, then burrow 1-4 inches into the ground to pupate.

This insect has a wide host range. Some of the plants utilized as host plants in the Midwest include apple, evening primrose (Oenothera spp.), four-o’clocks (the common annual Mirabilis jalapa and wild four-o’clock, M. nyctaginea), fuchsia, Gaura lindheimeri,

An interesting side note is that the caterpillars were once used as a food source by Native Americans. When abundant, the Cahuilla and Tohono O’odham collected nearly mature caterpillars feeding on sand verbena and other plants in the Southern California and Sonoran deserts. They pulled off the head and jerked out the guts, then placed the larva in a bag or basket. In the evening the insects were roasted, skewered on a stem, for a feast. Leftover caterpillars were dried over hot sand from a fire, then stored either whole or ground up.