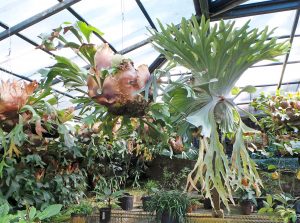 Staghorn ferns are a group of about 18 species of epiphytic ferns in the genus Platycerium of the polypod family (Polypodiaceae) native primarily to Africa, Australia and Southeast Asia, whose fronds supposedly resemble the forked antlers of male deer or elk. 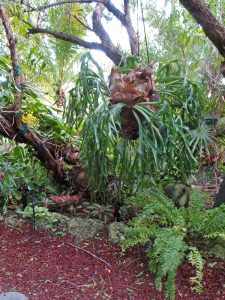 A large hanging staghorn fern in a Florida landscape. 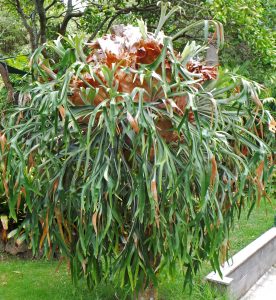 P. bifurcatum is the species most commonly cultivated as an ornamental plant, since it is probably the easiest to grow. Native to rainforests of Java, New Guinea and southeastern Australia, it does best with year-round temperatures above 40°F, so it can only be grown in gardens with a very mild climate (zones 9 and above) or as a house plant that can be moved outdoors during the summer. It has naturalized in Florida and Hawaii, where it is considered an invasive species on the islands. Staghorn fern makes a great ornamental adornment for a wall indoors or seasonally outdoors in the Midwest. This species was given the Royal Horticulture Society’s Award of Garden Merit in 1993. 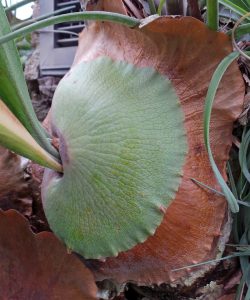 A mature P. bifurcatum can be as big as 3 feet across. The plant grows from short rhizomes that produce two types of fronds. The sterile (non-reproductive) basal fronds are the rounded to heart-shaped, overlapping, clasping, shield-like structures at the base of the fern (sometimes called the back plates). Initially dull green and succulent, they become papery tan to cinnamon-brown with age. They are flattened against the tree to protect the rhizome and tufted roots that grow from it and collect detritus that can provide nutrients for the plant. The fertile (reproductive) or foliar fronds are the brighter green, forked, strap-shaped portions most people would consider the “leaves” growing up from the base. These irregularly lobed, arching fronds grow up to 18 inches long. Each frond branches into two or three segments a number of times along its length. Spores are produced in sporangia in the dark brownish masses (sori) on the underside of the tips of these fertile fronds. Each plant is really a collection of many offsets (called suckers or pups) crammed together and will continue to grow new plantlets as the rhizomes expand out and produce new sterile fronds.

The branched fronds (L) are the fertile fronds which produce spores in sori on the undersides of the tips (LC-R). 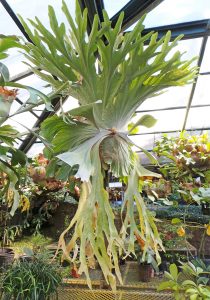 Some staghorn species, such as P. superbum, grow upright to form a “nest”.

All staghorn fern species produce both basal and foliar fronds, although the length, width, and amount of division of the fertile fronds varies greatly between species. The fertile fronds may be erect or drooping. Some other species have basal fronds that grow upright to form a “nest” to trap falling organic matter, while the shape of the shield produced by the overlapping basal fronds varies from rounded to kidney-shaped. And some species are solitary (don’t produce offsets). 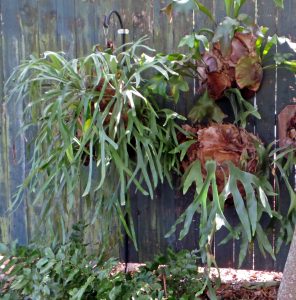 Staghorn frens are epiphytes that need some sort of support on which to grow.

As epiphytes, staghorn ferns do not grow in soil, but attach to trees when growing in nature. Small plants can be grown in containers with a rich and very well-drained medium. In indoor cultivation, staghorn ferns are typically grown mounted on wooden boards or bark slabs, in wire baskets, or on other supports that provide the essential perfect drainage and are more convenient for plant management than a living tree (as well as better showing off their distinctive looks and beauty than in a container). Some sort of growing medium – often sphagnum or peat moss – is provided for the roots coming from the basal fronds to grow into. The fern is secured to the support by monofilament fishing line, wire, plastic mesh or other materials wrapped over/through the dead, brown shield-shaped basal fronds (not over the soft, green fronds or they will be badly damaged or killed) to hold it in place until well established. As new basal fronds are produced, they will hide the fastening material as they grow over the old fronds. 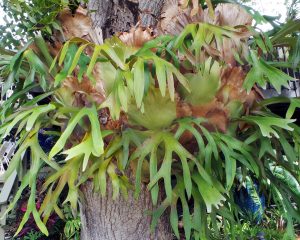 P. bifurcatum growing on tree outdoors in a tropical climate.

These tropical plants need good air circulation, bright indirect light, warm temperatures, moderate humidity and consistent moisture. Staghorn ferns absorb water through their fronds as well as the roots so be sure to soak the basal fronds and the medium. Allow some drying of the growing medium in between waterings; staghorn ferns rot easily if overwatered. Rainwater is best if it is available. Established plants are fairly drought tolerant so can withstand fairly long periods without water. More moisture is needed when growing in summer and less in cold weather. They can tolerate more direct sunlight when humidity and temperatures are high but also require more water when in direct light. 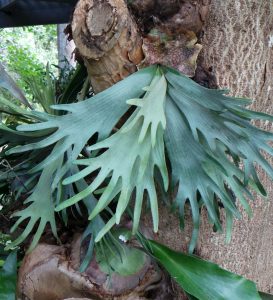 These plants do best with normal household temperatures above 55ºF. Staghorn ferns grown as house plants can be moved outside for the growing season once nighttime temperatures are consistently in the 40ºFs, acclimating them gradually to the higher light levels outside. Although staghorn fern can survive briefly freezing temperatures down to the mid-20ºFs, it is best to move plants indoors before nighttime temperatures drop into the 40ºFs in the fall. Plants can be fertilized monthly during the warmer months with balanced, diluted liquid fertilizer or slow-release fertilizer pellets placed in the growing medium. Providing sufficient humidity can be a challenge indoors and may require frequent misting when ambient humidity is low. If the light and air circulation is appropriate, a bathroom is an ideal place with its periodic humidity from the shower. Staghorn fern has few pests but may become infested with scale insects or mealybugs. The tan or brown, shield-like basal fronds shouldn’t be removed even if they look dead until they fall off naturally, as they help anchor and protect the plant. Don’t try to wipe off the tiny whitish-grey, furry scales on the fertile fronds that makes them dusty-looking as that covering helps slow transpiration. Withered fertile fronds can be pruned off. 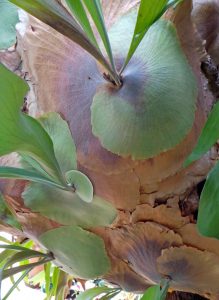 P. bifurcatum produces pups which can be carefully removed for propagation.

Like all ferns, these plants go through two alternating stages, the diploid sphorophyte (the plant we recognize as a fern) and haploid gametophyte. Spores produced on the adult plants grow into the gametophyte, a small heart- or kidney-shaped body (that is rarely noticed as it is green and only one cell thick, without roots, stems or leaves) that has both male and female sex organs. These mature at different times to increase the likelihood of cross fertilization, releasing flagellate sperm that swim to the eggs that are produced in flask-shaped structures (called archegonia) on other gametophytes. Once fertilized, a zygote is formed, which grows into a new sporophyte.

Staghorn fern can be propagated from the spores but because that is such a slow process they generally are propagated by division, carefully cutting off small pups with a sharp knife, making sure each piece has some fertile and sterile fronds and roots. New divisions should be kept warm and moist until established, which may take a long time.

Several other species of staghorn ferns are available from specialty growers for plant collectors (many of which are much more challenging to grow than P. bifurcatum).