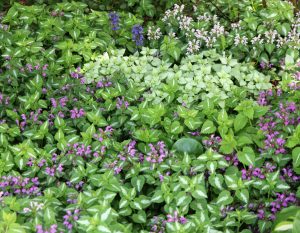 Spotted deadnettle, Lamium maculatum, is one of about 50 species in the type genus for the mint family (Lamiaceae) native to Europe, temperate western Asia and North Africa. The common name of “deadnettle” refers to the resemblance of the leaves to stinging nettles, but without the sting (therefore “dead”). This prostrate, herbaceous perennial is hardy in zones 3-8.

This near-evergreen plant (at least in mild climates) is generally a low (6-9 inches tall), spreading plant, but sometimes becomes mounded. The plants branch only at the base with the square, hollow trailing stems rooting as they spread to form a dense mat. The opposite leaves are toothed, pointed oval to triangular to heart-shaped, and can grow to over 3” long on petioles up to 1½ inches long. The downy to softly hairy leaves, which are unpleasantly scented when bruised, are green with a white or silver stripe down the midvein, or other markings or variegation in various cultivars. Leaf size, shape, variegation and hairiness is quite variable.

The opposite leaves (L) vary in shape, size and markings (LC and RC) and the amount of hairs on the leaves (R). 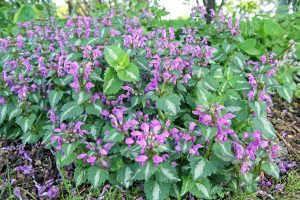 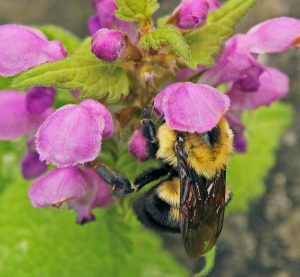 A bumblebee pushes into a spotted deadnettle flower.

Spotted deadnettle blooms prolifically from late spring to early summer and continues sporadically into fall, attracting bees, especially bumblebees. The flowers occur in leafy heads (verticillasters) formed at nodes on the upper half to upper third of the stems and terminals, but not on all stems. Each inflorescence has 2-8 widely spaced pink to purple, or sometimes white, two-lipped flowers, up to ¾” long. The upper lips of the flowers are hood or helmet-shaped, like a roof over the stamens with their orange pollen, while the bisected lower lips are often whitish with purple dots (but vary by cultivar).

Whorls (L) of buds (LC) open along the stems (C), with individual flowers typical of the mint family with an upper “hood” and bisected lower lip (RC) with the hood covering the stamens (viewed from below, R).

Flowers are followed by small, inconspicuous fruits hidden by the leafy parts of the inflorescence that start out green and change to brown as they mature. Each fruit is comprised of four nutlets, or one-seeded sections.

The leafy whorls of inflorescences hide the inconspicuous dry fruits (L) which change from green (LC) to brown (RC). The individual nutlets or seeds (R). 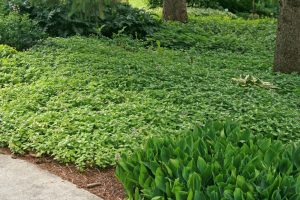 Spotted deadnettle can cover large areas quickly as a groundcover.

This plant is typically used as a groundcover in shady areas, and can cover large areas quickly. Since it is adaptable to a variety of light regimes, it is an ideal plant to use in transition areas between shade and sun. It fills in nicely between other, larger or more upright perennials such as ostrich or cinnamon fern, bleeding heart, hellebore, goatsbeard (Aruncus dioicus), Brunnera macrophylla, Japanese forest grass (Hakonechloa macra), 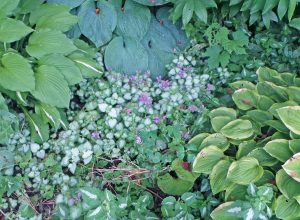 or medium to large hostas, but is often too vigorous to site near shorter perennials which it tends to overrun (although it is easy to cut back or pull off wayward stems throughout the growing season to prevent this from happening, if desired). It works well to cover dying bulb foliage and smothers many weeds. Try growing several varieties with different leaf colors together or in combination with sweet woodruff, Galium odoratum, as a tapestry for an interesting underplanting beneath small trees or around roses. 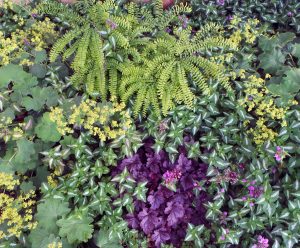 Stems of this vigorous plant may need to be removed to prevent it from overruning smaller perennials.

Since it has a relatively fine texture, combine it with plants with large leaves for textural contrast, and dark-leaved plants such as coral bells (Heuchera, various cultivars) or black snakeroot (Cimicifuga racemosa ‘Hillside Black Beauty’) for color contrast. It can also be used as an edger, but will have to be cut back regularly to keep it in bounds. It can be used as a “spiller” in hanging baskets or containers. 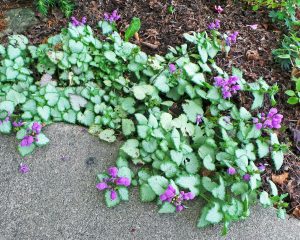 Lamium maculatum grows best in part shade (especially for silver types which often need more light to maintain their color) or shade in moist, humus-rich, well-drained soil, but in our climate will even grow in full sun. Although it does best in moist conditions it is drought tolerant and will grow in dry shade, but does not thrive in compacted or poorly drained soils, and many varieties suffer winter injury in wet soils. In hot and humid climates the foliage may decline in midsummer; plants may be cut back or sheared to stimulate new growth. It has few pest problems and is not favored by deer or rabbits. Crown or stem rot can occur when the soil remains too wet.

This plant is easy to propagate at any time during the growing season from cuttings of basal stems (not flowering stems) or by division. It roots where the stems touch the ground and once established these can be cut from the original plant and easily moved. It will also self-seed, although the cultivars will not come true from seed, and if volunteers are not removed (which can be challenging for the silver-striped varieties which can initially look very similar to the original plants) they may overtake the parents. Plants will spread indefinitely to fill a large area, so spacing is not that important, unless quick coverage is desired.

Spotted deadnettle roots at nodes (L) so is easy to divide and also self-seeds (R).

Some common cultivars include: