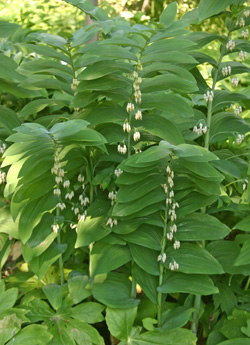 Solomon’s seal is the common name for a number of species in the genus Polygonatum with an attractive architectural form. The rhizomes of various species have been used medicinally to treat various ailments or ground and baked into a type of bread, and the young shoots were eaten like asparagus. There are about 60 species in this group of herbaceous perennials in the lily family (Liliaceae) but only a few are commonly grown as ornamentals in the US, including both native and exotic species.

The alternate leaves of Solomon’s-seal are carried on long, upright to arching stems. The linear to broad, egg-shaped leaves zigzag their way up the unbranched stalks, each pair offset slightly along the stem. Most species have solid green leaves but some have variegated leaves. The leaves turn lemon yellow to brown in autumn and the stems wither away for the winter. 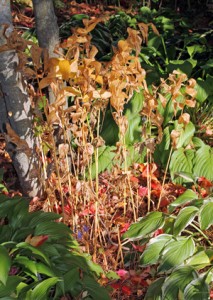 The foliage of Solomon’s seal
turns yellow or brown in autumn.

The following spring a larger stem is produced from the rhizome. Only a single stem is produced annually from each rhizome section, but the rhizomes branch freely, so each plant will have multiple stems. The plants spread at a modest pace to form colonies of plants. The thick, fleshy, white, irregularly-shaped rhizomes bear rounded scars where previous year’s stems arose – and supposedly it is the resemblance of these scars to the two inverted triangles that were the symbol or seal of King Solomon that gave rise to the common name. These rhizomes can grow quite large and become woody.

Polygonatums bloom with clusters of two or more small, bell-shaped flowers that dangle beneath the stems. The greenish-cream to white flowers arise at each node where the stems arch over and are therefore often hidden by the foliage. The flowers last for several weeks in the spring, then are followed by spherical, blue-black fruits resembling small grapes that are often eaten by birds.

Polygonatum species have hanging, bell-shaped flowers like these of P. biflorum (L) that eventually form fruits later in the season (R). 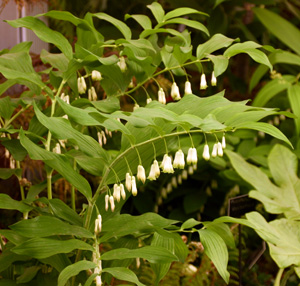 Solomon’s-seals prefer rich, moist, well-drained soils in partial to full shade (where they will receive morning or dappled sunlight rather than afternoon sun) but they are quite adaptable to many situations, including those difficult dry shade spots near tree roots. It is best to allow fallen leaves from trees to remain where Solomon’s-seal grows as a natural mulch and to form humus. They are very drought tolerant once established, have few insect or disease problems, and are not favored by deer. These plants can be grown from seed but they are easiest to propagate by division. 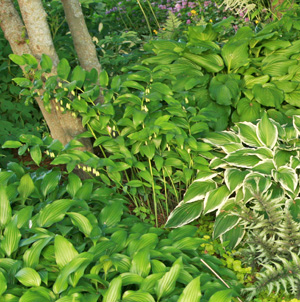 Solomon’s seals combine well with other shade-loving plants such as hostas.

Rhizomes can be dug in the spring, just as the new growth emerges from the ground, or in fall, but plants typically don’t require division to remain vigorous. Entire clumps can be transplanted or larger rhizomes can be broken or cut into pieces to create multiple plants. Place the rhizomes horizontally a few inches deep and keep evenly moist until established.

Solomon’s-seals are typically used as foliage plants (even though the flowers are nice, they are not particularly conspicuous), for their coarse texture and architectural presence. They combine well with bleeding hearts (Dicentra), ferns, hostas, 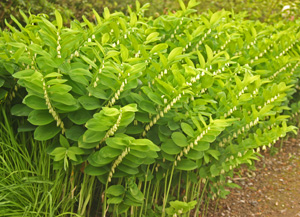 A clump of Solomon’s seal at RHS Garden Wisley.

lungworts (Pulmonaria), pigsqueak (Bergenia), wild ginger (Asarum canadensis and A. europaeum), astilbes and other shade-loving plants in shady borders or for naturalizing in a woodland garden where they provide contrast in texture and height with lower, mounding plants. They can be paired with daffodils and tulips, which will bloom before the Solomon’s-seals are fully grown and later the plants will help hide the fading bulb foliage. The variegated types are great for brightening up dark areas. The native species may just show up in shady sites, the seeds deposited by birds.

Some of the more commonly available species and cultivars include: 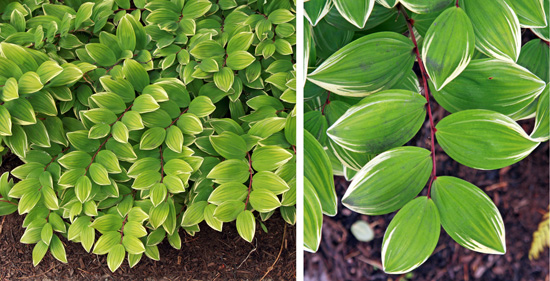 In addition to the “true” Solomon’s-seals, there are other plants that are called Solomon’s seal, including: