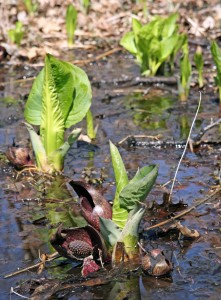 Skunk cabbage in swamp in spring.

One of the first native first native plants to bloom in early spring in the upper Midwest is Symplocarpus foetidus, commonly called skunk cabbage, swamp cabbage or other names referring to the shape of the large leaves or it’s smell. Skunk cabbage was used medicinally by Native Americans and in the 19th century was listed in the U.S. Pharmacopoeia as the drug “dracontium” for the treatment of respiratory diseases, nervous disorders, rheumatism, and dropsy. This low-growing plant in the arum family (Araceae) has a boreal distribution in North America and possibly northeast Asia (some botanists consider the Symplocarpus found in northeast China, Siberia, and Japan to be the same species but others do not; there is also a similar-looking species, yellow-spathe western skunk cabbage, Lysichitum americanum, that occurs in western North America). In eastern North America it is native from Nova Scotia and southern Quebec in Canada, west to Minnesota, and south to North Carolina and Tennessee. It is found in moist habitats, including marshy deciduous woods, wet thickets, swamps, near springs, alongside streams and wetlands, by seeps, and in bogs, where it is often in bloom well before the snow melts. 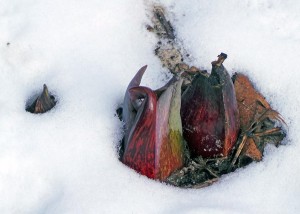 Skunk cabbage can bloom even when there is snow on the ground.

Skunk cabbage is one of just a few plants that exhibit thermogenesis, or the ability to metabolically generate heat, by cyanide resistant cellular respiration. Since it can bloom while there is still snow and ice on the ground, the spadix can generate temperatures on average 20 degrees warmer inside the spathe than the surrounding air temperature for nearly two weeks, even keeping the temperature constant and optimal for flower maturation and pollination. 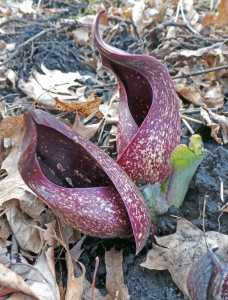 The dark-colored flowers emerge before the leaves come out.

The dark-colored flower buds are the first thing to poke out of the mud in the spring, often before the vernal equinox in many locations and many times when there is still snow on the ground. This plant produces an inflorescence typical of the arum family, with a large spathe surrounding the spadix. The twisted, hood-like spathe, with a narrow opening on one side, is 4-6 inches tall that is pointed at the apex. They may be solid deep wine-red or maroon, or mottled or streaked with yellow or green. The spathe never opens completely, forming a protective enclosure around the ovoid spadix that can be pale yellow to dark purple in color. Numerous small flowers are tightly packed on the 2-5 inch long spadix. Each individual ¼ inch flower has no petals but just four inconspicuous, fleshy, straw-colored sepals that never unfold. The stigmas (female parts) are exerted first, and then the stamens (male parts) emerge at the base of each stigma, preventing self-pollination.

The spathe never fully opens and remains surrounding the spadix (L), which can range in color from pale yellow (LC), to mottled (RC), to dark purple in color (R). The stigmas and stamens are exerted from the sepals in all three.

As its common name suggests, this plant has stinky-smelling flowers, with a somewhat skunk-like scent. The putrid odor lures in its pollinators, primarily carrion-feeding flies and gnats, which are attracted to the scent of decomposing flesh, but they can be visited by bees, beetles, and other insects, possibly because of the warmth of the flowers. The insects carry the pollen from one flower to another to pollinate the plants.

After the flowers are pollinated, the flower head swells and develops into a compound fruit with a blocky surface. The spathe withers and disappears, leaving the ovoid to rounded, simple fruits on an elongated stalk. The 2 inch diameter fruit heads have numerous berry-like fruits, each with one seed, that form a bumpy geometric pattern. They start out green and dark purple but change to maroon and then dark brown or black, so they are easily overlooked laying on dark soil. In late summer the fruit heads fall apart and the hard, pea-sized seeds fall into the mud to be dispersed by animals or water, or germinate where they lay.

By late spring or summer the spathes at the base of the plant (L) wither away (C) to leave the blocky compound fruit exposed, but easily overlooked (R).

The leaves all emerge from a single bud that formed from the thick rootstock the previous fall. Once the spathe begins to wilt – about the same time temperatures are consistently warm enough not to freeze the new leaves – the spear-shaped bud begins begin to expand, growing longer than the spathe and rapidly unfolding in a spiral pattern. Each rolled, bright green leaf unfurls like a scroll to expose the next leaf, eventually forming a large, funnel-shaped rosette of dark green leaves. The oblong to ovate leaves grow up to 36 inches long and a foot wide on thick petioles. The petioles – which start out quite short, but eventually grow up to 1 foot long – are concave along their upper surfaces. Each leaf has entire margins that may be a little wavy, a smooth surface, and conspicuous veins that produce an almost quilted appearance. The leaves have a pungent, skunk-like odor if cut or crushed. The foliage is rich in calcium oxalate so causes irritation in the mouth and throat if ingested, but some animals, such as bear or some birds, will eat the buds or very young leaves as they are unfurling.

The leaves emerge from a single bud (L) to unfurl in a spiral (LC, C, RC) to form a large, funnel-shaped rosette (R).

By the time the trees have leafed out to form a complete canopy, the leaves of skunk cabbage begin to decline. Small holes appear in the leaves, parts turn black, and they begin to wither away and decay, disintegrating into the environment until only a few leaf bases remain by the end of summer. Being a very fast grower, all the above aboveground parts, including leaves, petioles and the spathe and spadix, have a spongy, watery texture with very little of the fibrous cellulose that stiffens woodier plants, so there is almost no dry matter left on the ground to decay.

Skunk cabbage has a massive root system, with contractile roots which pulls the plant deeper into the soil each year. A few inches below the surface a thick mat of unbranched, fibrous roots grows out in all directions from the elongated rootstock for a few feet, terminating in an extensive system of fibrous rootlets. The roots and rootstock store large amounts of nutrients necessary for thermogenesis and to produce the lush foliage the following year. 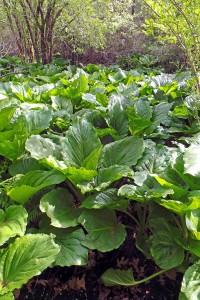 A dense natural population of skunk cabbage in a marshy area.

Skunk cabbage is occasionally cultivated in gardens with the appropriate conditions and would make an interesting specimen for the bog garden, but more commonly is seen just in natural habitats. It is typically found growing with sedges, jewelweeds, and marsh marigold (Caltha palustris). Old plants are extremely difficult to dig out, so transplanting young plants or growing from seed are the best options for moving skunk cabbage into a very moist garden. The seeds will germinate either in the fall or in spring but should be planted in the fall when fresh and uncleaned (leave the gelatinous coating) and should not be allowed to dry out before planting. It does best in partial sun to light shade and consistently wet mucky soil. It tolerates shallow standing water for a short time but will not survive where the crown remains under water all year.