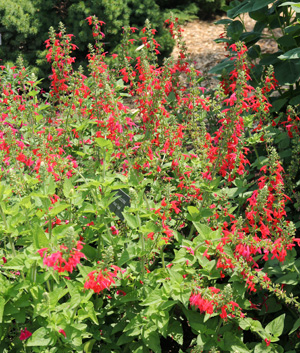 Scarlet sage is a perennial usually grown as an annual in cooler climates.

Salvia coccinea is one of about 900 species in the genus Salvia. It is just one of dozens of sages grown as garden ornamentals. As both its scientific name of coccinea (meaning “scarlet dyed”) and common names of scarlet sage and blood sage suggest, this herbaceous perennial in the mint family (Lamiaceae) has bright red flowers. (Beware of common names – another species, S. splendens, is also sometimes called scarlet sage, but these are very different plants; S. coccinea is also occasionally referred to as Texas sage or tropical sage, both those names are used for other species, too.) 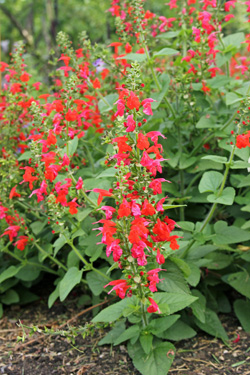 Scarlet sage has an upright to vase-shaped habit.

Probably native to Mexico, it is widespread throughout the Southeastern US, through Central America, and in northwestern South America (Columbia, Peru and Brazil). It is the only native US sage with red flowers. S. coccinea is hardy in zones 9 and 10, and will reseed readily in zones 6 to 8, but is easily grown as an annual in cooler climates.

Scarlet sage is an vase-shaped to upright subshrub in its native range but because it is fast growing it also makes a good bedding plant in colder areas where it is not hardy. Plants grow 2-4 feet tall and up to 2 ½ feet wide, branching readily. 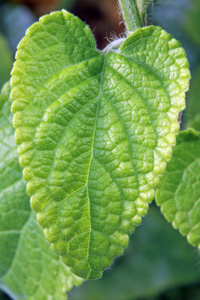 The medium green leaves are slightly hairy and have a scalloped edge.

The medium green, hairy leaves are roughly triangular in shape, with scalloped edges. The opposite leaves vary considerably in size but all have long petioles coming off the square stems.

Scarlet sage blooms continuously whenever the weather is warm (including indoors in a greenhouse during the winter). Flowers are produced in loose whorls in an upright, terminal racemose inflorescence up to 10 inches long. 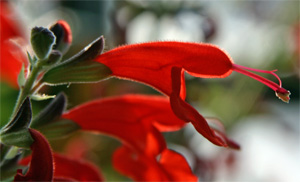 Like other plants in the mint family, scarlet sage flowers have a colorful corolla emerging from the calyx.

Each inch-long tubular flower has two parts: a colorful tube (corolla) protruding from the calyx. The showy flowers produce a lot of nectar so are highly attractive to 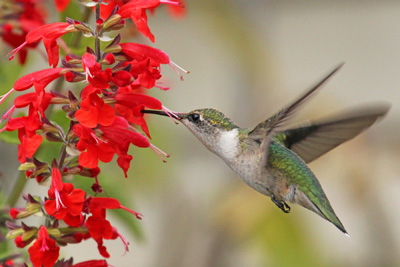 hummingbirds, giving rise to yet another common name of hummingbird sage. They are also visited by butterflies and bees. In addition, salvias make great cut flowers, with S. coccinea bringing an airy appearance to arrangements. The flowers are followed by tiny brown seeds hidden in the calyces. Goldfinches and other birds may visit the plants to pick out the seeds.

The small, dark-colored seeds (R) remain within the dried calyx (L and C) until they are removed by birds or shaken loose.

Flower color and size is variable. The species is typically bright, scarlet red but cultivars have been developed with white, pink, salmon, orange and bi-colored flowers. Some of the most common cultivars include: 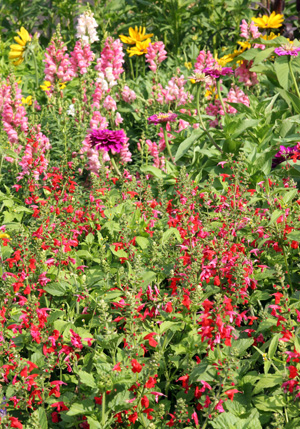 This species of sage, like many others, does best in full sun but will tolerate some shade and needs well-drained soil. It likes hot weather and tolerates drought but will not flower well if not watered at all. Wait until all danger of frost has passed and the soil is warmed before placing plants outdoors. Like many sages, scarlet sage will not grow much when the weather is cool but will really take off when it gets hot, especially if there is also plenty of rain. Space plants 12-18 inches apart to allow for vigorous growth, or more closely for an impressive planting more quickly. Deadheading will encourage repeat blooming. Plants that get too tall or unsightly can be cut back for fresh growth and new blooms later in the season. 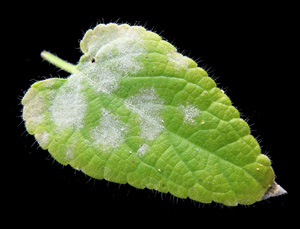 Scarlet sage does not have many specific pests when grown as a bedding plant (it is not favored by deer) but may be plagued by mealybugs, aphids, whiteflies or spider mites indoors. This plant is very likely to develop powdery mildew, which can be reduced by providing sufficient air circulation and planting further apart.

Use scarlet sage in containers, annual borders and in mixed beds. These salvias combine easily with other plants for accents of wispy color. The cultivars with light-colored blossoms are wonderful planted in front of darker plants or a dark background so the flowers stand out. It is best to plant in masses if grown to attract hummingbirds and butterflies.

Seedlings of Salvia coccinea viewed from above (L) and the side (R).

Scarlet sage is propagated by seed or division. Seeds will germinate and plants will bloom any time of the year, so they are easily grown in a greenhouse in cold climates. Start transplants from seed indoors 6-8 weeks before the average last frost. Sow seeds shallowly, as they require light to germinate. It takes 2-3 weeks for the seeds to germinate. Older plants can be divided in spring, or cuttings taken during the growing season. This is generally only practical for maintaining specific cultivars or selections, as plants are so easy to grow from seed (and volunteer seedlings are likely to occur in containers if moved to a protected location for the winter; these are easily pulled or transplanted when small).