Scale insects are a large and diverse group (about 8,000 described species) in the superfamily Coccoidea of the order Hemiptera, closely related to aphids and whiteflies, but they look quite different from your typical insect (the mealybugs are part of this superfamily, too, but are not included in this article). These small insects vary a lot in size (from 1/16 to 3/8 inch across) and appearance but all grow beneath a wax covering that resembles an individual reptile or fish scale, hence the common name. This covering which protects the insect underneath it may be a flattened oval, dome-shaped, oyster shell-shaped, resemble small mussels, or have a fluffy coating. 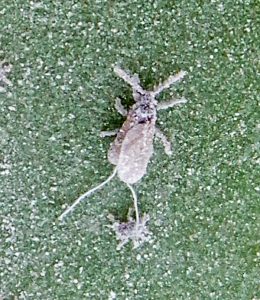 Female scales, usually immobile, are wingless and often with no visible legs or antennae and don’t even look like an animal. The seldom seen male scale looks somewhat like a tiny gnat but doesn’t have mouthparts and cannot feed. Some species are hemaphroditic while others reproduce by parthenogenesis. Females lay eggs under their bodies which hatch into the first instars, called crawlers, which do have legs and are mobile. 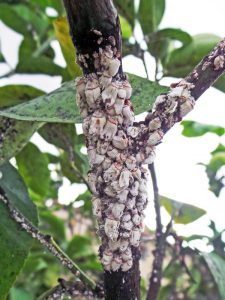 Usually smaller than a pinhead, in general they move around searching for a favorable spot to settle down to feed and begin producing their distinctive scale coverings but in some species they are moved by wind to settle on other plants. When they molt to the next instar almost all female scales lose their legs and are sedentary as adults; only a few species have the ability to move after the crawler stage. 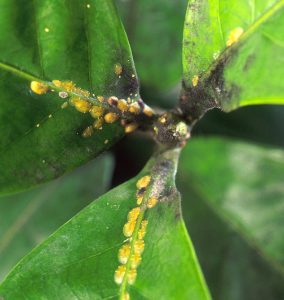 Scale insects feed on a wide range of host plants and are common pests of many indoor and outdoor herbaceous ornamental plants as well as many trees and shrubs. Most species are restricted to particular host plants or plant groups, and some are serious crop pests. They feed by sucking plant sap through their long, needle-like mouthparts (six to eight times longer than the insect itself!). Many also excrete sticky honeydew which supports the growth of sooty mold. Sooty mold is a black-colored fungus; when it coats the top side of leaves, that interferes with photosynthesis and makes the plants unattractive and yellow.

There are, however, a few types of scale insects which are economically valuable and are “farmed” for the substances they produce. Cochineal scales (Dactylopius spp.), which grow only on cactus, produce red dyes for coloring foods and dyeing fabrics, several genera of lac scales produce shellac, and there are other species that produce other less common materials. In addition, several species of Dactylopius are used as biological control agents against invasive species of Opuntia cactus.

Traditional harvest of cochineal scales on Tenerife, Canary Islands (L and LC), the dried, cleaned insects (C) for sale (RC) and with one added to a glass of water, releasing the red dye (R).

There are two types of scales: the soft scales and the armored scales. 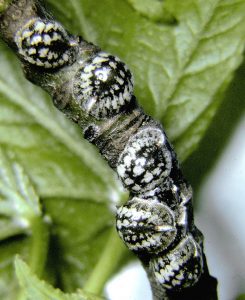 The soft scales (Family Coccidae) are the more important of the two groups of scales found on indoor plants. Soft scales are round to oval, dome shaped, and 1/8 to 1/4 inch long when mature. Immature scales start out light in color and darken at maturity. Many resemble miniature tortoise shells. Fifty to 2000 eggs or live young, depending on the species, are produced in or beneath the female’s body. The eggs hatch in 1 to 3 weeks. The pale, newly hatched nymphs are the mobile crawler stage but after finding a suitable part of the plant they settle down for the remainder of their lives. The nymphs go through three instars. A waxy scale covering is produced over the female after she becomes an adult. The waxy scale covering adheres tightly to the body of the female and cannot be separated from it. Female soft scales don’t lose their antennae and legs completely, but are greatly reduced so although they can move, the adults seldom do. They generally overwinter as immature, fertilized females. 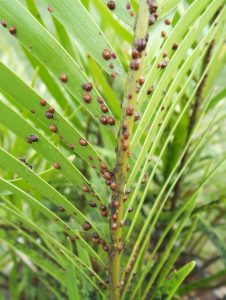 Brown soft scale on the underside of cycad leaves.

Soft scales are usually found on the undersides of leaves and stems, although some species may occur on upper leaf surfaces. A heavy infestation will cause yellowed leaves, distorted foliage especially at the growing tips, twig dieback, or defoliation. However, soft scales can be a nuisance long before there are any visible symptoms. Copious amounts of honeydew excreted by the scales will make the plants and everything around or under them sticky and attracts ants, bees, wasps, and flies. A dark fungus called black sooty mold grows on sweet honeydew, blackening anything where the honeydew is deposited.

Some species of soft scales commonly found in the Midwest include: 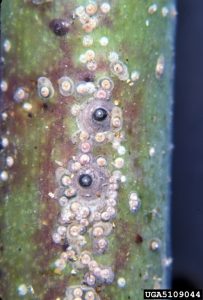 The armored scales (Family Diaspididae) get their name from the hard, waxy covering over the body. Armored scales are generally smaller than soft scales (1/16 to 1/8 inch long) and are not raised and bumpy like soft scales – and therefore are more easily overlooked than soft scales, especially when the scales match the color of the bark of their host tree. The scales vary in shape from circular to elongate (elliptical or oystershell-like) and in texture from smooth to rough, and are variously colored. Underneath a hard cover made of wax and protein is a yellow or orange soft body. Eggs are laid beneath the female’s scale, or in some cases, live young are produced under the scale. The crawlers move to another part of the plant and settle for the remainder of their life. A waxy cover that incorporates the shed skin of the crawler and subsequent stages is produced over the immature insect. Female scales lose their legs and antennae during the first molt. The legless adult female remains under the scale. They usually overwinter as eggs under the hard shell of their mother.

Armored scales are generally found on lower leaf surfaces and stems, often forming thick crusts. Plant injury caused by armored scale feeding is similar to that of soft scales but they tend to have a greater impact on their host than soft scales do. Toxins injected while feeding on leaf tissue kills cells around the feeding site, causing a yellow or brown halo, and heavy feeding can disrupt nutrient flow enough to cause in premature leaf drop or branches to die. No honeydew is produced, however, so sooty mold is not a problem. 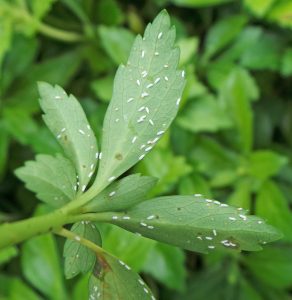 Although common, armored scales are not as much of a problem indoors as soft scales because they are limited in the types of plants they infest (mainly trees and shrubs) and don’t produce honeydew. Outdoors they can be significant problems on ornamental plants. Some species of armored scales common in the Midwest include: 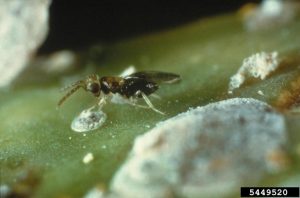 Weather and natural enemies, such as lady beetles and parasitic wasps, usually keep scale insects below damaging levels but if scale numbers become abundant management mat be required. Controlling scales can be a difficult challenge. It’s best to prevent infestations in the first place by carefully inspecting plants before purchasing, but often the scale wax covering blends in with the stem or bark and is difficult to see. Since scales can occur on all plant parts, check every part of the plant.

For lightly infested houseplants, most of the scales can be removed with a soft-bristled toothbrush or cotton swab dipped in either soapy water or 70% isopropyl alcohol. Thoroughly washing the leaves with a mild detergent solution (being careful to avoid wetting the soil) may also work. This will also wash off honeydew and dislodge crawlers. Inspect the plants closely at weekly intervals, and repeat the procedure as necessary (probably several times). If a plant is heavily infested, disposing of it may be the best solution, although that may not be an option for a valuable or cherished plant. 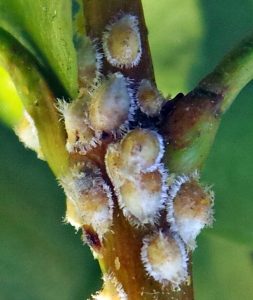 Scales can be managed by mechanical and chemical controls.

Chemical control is often the most effective way to combat scale problems, especially in the landscape. Adult scales, however, are protected from insecticides by their waxy coverings, so chemical control measures should be aimed at unprotected immatures (crawlers). Accurate identification of the scale species is important in order to know when scale crawlers should be active and treatments should be applied. Crawlers may be detected by placing double-sticky tape on plant branches. Spot treatments should be applied when scales are present. Applications of insecticidal soap or horticultural oil will kill scales but require thorough coverage and usually at least three treatments to control an infestation. Repeat every six to seven days until scales have been eradicated. Synthetic insecticides labeled for scale control may require fewer applications but some treatments can cause plant damage, so sprays should be tested first on a small part of the plant and all label directions should be followed. Systemic insecticides applied to the soil help suppress populations but do not eliminate the problem. Applications on larger woody plants can even give unsatisfactory control due to unequal movement of the systemic material in the plant. Horticultural oils, that suffocate the insects, may be effective against some adult scales. Dormant oils need to be applied in early spring before leaves appear to kill the overwintering stage of some species. Dead scales do not fall from plants, so it will be necessary to examine plants to determine whether the scales are dead or alive. When crushed, a dead scale will be dry but if the body is juicy or leaves a streak when smeared on a piece of paper it was alive.