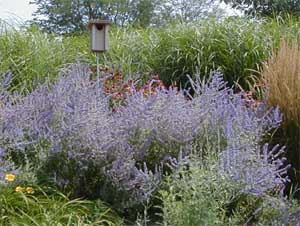 Russian sage is a great addition to the border, blooming in late summer.

Russian sage, Perovskia atriplicifolia, is an attractive plant with elongate, gray-green leaves and square, silvery-gray stems that produces an airy cloud of color late in the summer. The tiny, purple-blue, tubular flowers are arranged in whorls along long stems. This semi-woody plant was named Perennial Plant of the Year in 1995 by the Perennial Plant Association. It superficially resembles lavender, and can be used in areas too cold to grow lavender reliably. This member of the mint family (Labiateae) is hardy in zones 4-9. 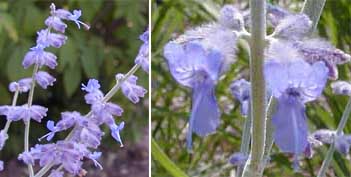 The genus was named by the Russian botanist Karelin about 1840 after B. A. Perovski, the Turkestani governor of the Russian province of Orenburg – but the plant is not native to Russia or a sage (Salvia). Perovskia (pronounced “per-OFF-skee-uh”) is native to Central Asia (Afghanistan, Pakistan, etc.) and Tibet at elevations to 8,000 ft. The sage reference probably comes from the characteristic sage aroma given off when the leaves are crushed. Russian sage has been in cultivation since the mid-1800’s. 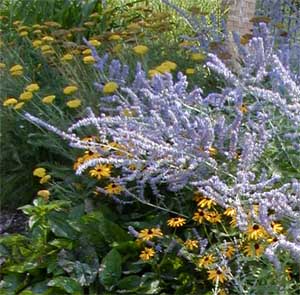 Perovskia can be used in the middle or back of the border or cottage garden or in many other places in the landscape. It combines well with ornamental grasses and white or yellow-flowered perennials, especially white phlox, Rudbeckia (blackeyed Susan) and coreopsis. Other possible combinations include red-leaved barberry or dark green foliage plants for contrast, or blending with other silver-leaved plants. The silvery foliage and open architecture add an almost-Mediterranean feel to the landscape. It can also be useful as a filler plant or for separating stronger colors. Use it as a specimen in small areas, in mass to intensify its presence in large spaces, or in a long, wide row as a divider hedge.

Bees are a common visitor to the flowers of Russian sage.

There are seven species of Perovskia, but P. atriplicifolia is the only one commonly available. [There is some confusion in the nursery trade, and plants sold as this species may actually be a hybrid between P. atriplicifolia and P. abrotanoides.] The species grows 3 to 4 feet tall, producing lavender blue flowers all summer on fine textured, aromatic, gray-green leaves and gray-white stems. It is quite drought resistant. The flowers are attractive to bees and other insects. Cultivars are generally superior to seed grown plants. 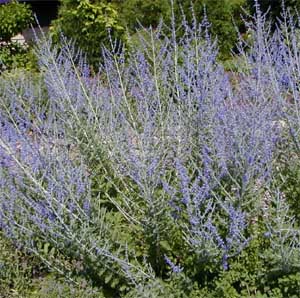 Russian sage blooms for up to 2 months.

Plant Russian sage in full sun and well-drained soil, spacing the plants about 18 inches apart. Container-grown plants are best planted in early spring, setting them at the same depth as they were in the pot, but they can be planted out through the summer until one month before a hard killing frost. Small plants may be slow to establish. Water regularly during the first growing season to establish a deep, extensive root system. After the plants are established, they can tolerate drought very well.

Once well-established, Russian sage is easy to grow, with essentially having no disease or insect problems. The plants tend to flop a little, especially when young. Russian sage can be staked, or planted near other plants that will support them. They can also just be let go to provide a more informal look. 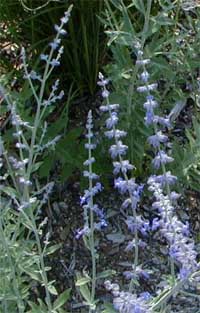 Russian sage may be slow to establish, but then is a tough garden plant.

Good drainage and aeration will enable the plant to survive wet winters. Plants will rot if the soil is too moist. Leave the old stems on through winter and cut them down to about a foot in the spring to keep the plants from getting woody (which can result in a reduction in foliage and flower quality). Fertilize before new growth begins in spring.

Russian sage can be grown from seed. Sow seed at any time of the year, just covering the seed with medium. Germination usually takes 1-4 months at a optimum temperature of 60-65ºF. An initial cold treatment for 10 days to 6 weeks at 35-44ºF may enhance germination, as well as produce a more compact plant. Transplant the seedlings when they are large enough to handle, being careful not to damage the roots. Harden off the seedlings before planting in the garden, preferably in late spring.

To increase named varieties, taking 3-4 inch long softwood cuttings in summer is the best method. Propagation by division is possible, but slow.