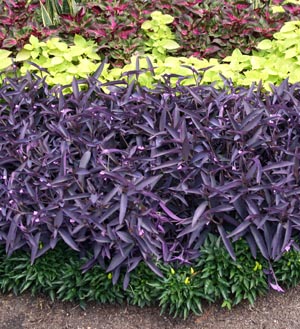 Tradescantia pallida is a tender evergreen perennial native to northeast Mexico (from Tamaulipas to Yucatan) grown as an ornamental for its striking purple foliage. Originally named Setcreasea pallida by Joseph Nelson Rose in 1911, it was reclassified in the genus Tradescantia by D.R. Hunt of the Royal Botanic Garden Kew in 1975. The former name S. pallida or S. purpurea is still often used.

Commonly called purple heart or purple heart wandering jew (and occasionally “Moses in the Basket,” although this usually refers to a different species) this herbaceous plant in the Commelinaceae (spiderwort family) is a low-growing trailer that is hardy in zones 7-10, but is easily grown as an annual or houseplant in colder climates. 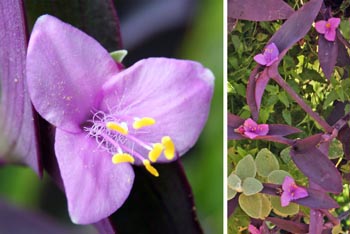 The small, pale purple flowers are borne on the ends of the stems.

Dark purple, lance-shaped leaves up to 7” long are produced alternately on fleshy stems. The fleshy leaves are covered with pale hairs and form a sheath around the stem. The stems are quite fragile, and break off easily if brushed or kicked too hard. In colder areas it will die back to the ground in winter, but comes back from the roots in spring. The rambling plants get about a foot high but can spread much wider.

From midsummer through fall, and sporadically at other times, relatively inconspicuous pink or pale purple flowers with bright yellow stamens are produced at the ends of the stems. These ½” wide blooms have three petals typical of this genus. 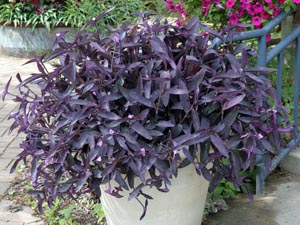 Purple heart can be used as a ground cover, cascading in baskets, as a trailer in mixed containers or as a houseplant. They are best used in masses for in-ground plantings and will spread relatively quickly. The purple leaves are a nice contrast to gold, chartreuse, or variegated foliage, and a great complement to pink, light purple, or burgundy blossoms on other plants. Pair it with complementary colors for bold combinations – chartreuse coleus, orange marigolds or red begonias. 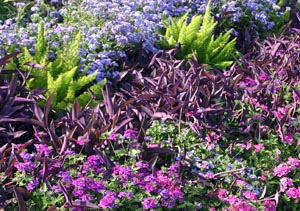 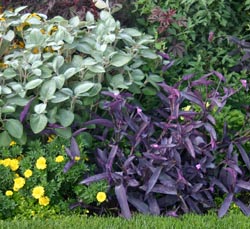 Purple heart is easy to grow.

Grow purple heart in full sun for best color development; plants growing in shade tend more to green than purple. Pinch the plants to promote more compact growth. Plants are drought tolerant and thrive on neglect, but also tolerate frequent watering. Fertilize monthly when actively growing. Cut plants back after flowering to prevent them from getting spindly. If grown in containers to hold indoors over the winter or as houseplants, reduce watering during the winter and don’t fertilize until new growth starts in spring. Purple heart has few pests, but scales and mealybugs can be a problem. The juice from the leaves or stems may cause skin redness and irritation in some people and dogs, but this is not a common problem.

Plants are easily propagated by taking cuttings from any part of the plant – just shove a node into the soil or potting mix and it will usually root (or place in water until roots develop). This plant can also be propagated from seed but that is rarely available.
– Susan Mahr, University of Wisconsin – Madison