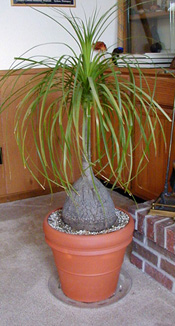 Ponytail palm is a plant with a confused identity. Not a true palm (the family Arecaceae), it is one of seven species in the genus Beaucarnea or Nolina. The group has been included in the Nolinaceae, Agavaceae, and Ruscaceae. Regardless of its taxonomic designation, this group of small tropical trees is native to Mexico, Belize and Guatemala. Ponytail palm, Beaucarnea recurvata (or Nolina recurvata) from semi-desert areas of southeastern Mexico, is the species often grown as a low-maintenance houseplant in temperate climates, as well as being used as a landscape specimen in dry, warm climates (zones 9-10). This succulent is often mistakenly called a palm because of its single trunk with leaves at the top. Other common names include Bottle Palm and Elephant’s Foot Tree. 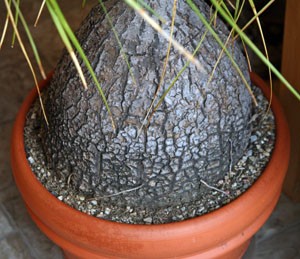 The enlarged base resembles an elephant’s foot when older.

In the ground, this plant can grow to 30 feet tall, but in containers remains much shorter. Its trunk has a flared, enlarged base (a globose caudex) suggestive of an elephant’s foot. The caudex can eventually get up to 12 feet across, and often develops fissures or crackles on the gray surface, furthering the pachyderm comparison. The swollen trunk serves to store water, allowing the plant to survive extended droughts. It begins with a single stem but will branch with age and after flowering. The plants also will branch if broken off or cut when small (less than 6″ diameter); growers of ornamental plants often do this while plants are dormant in order to produce three-headed plants. 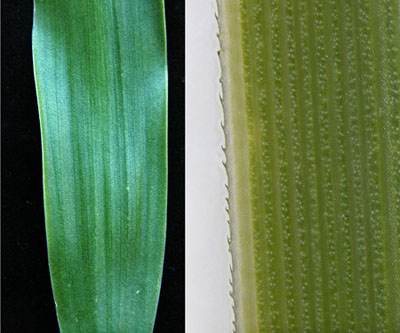 The leaves of the common ponytail palm, B. recurvata, may look smooth, but actually have sharp teeth that are seen only under magnification (right). These are tiny, soft and forgiving; other species have leaf edges that can draw blood if handled carelessly.

The evergreen leaves are long and strap- or grass-like. On mature plants they can be up to six feet long and only an inch wide but are much shorter on smaller plants. They are rather tough and leathery, with very finely serrated edges – sharp enough to cut skin. The rosette of leaves emanates from the top of the trunk or ends of the branches, and gracefully cascade down like a green fountain. On many plants the leaves twist or curl slightly when longer, giving the plant an interesting, flowing look. Older leaves eventually turn yellow and dry up; these can be removed.

Normally only large trees flower, producing large, upright branched panicles with small but numerous green- to creamy-white or pinkish flowers that are highly attractive to bees. Plants are dioecious, so only female plants will produce seed. What appear to be small offsets may also naturally be produced on the caudex. These can be cut off flush with the trunk surface if a single-trunked plant is desired; otherwise they can be left to grow into branches. They will not root to produce new plants, however. Variegated forms are sometimes seen. 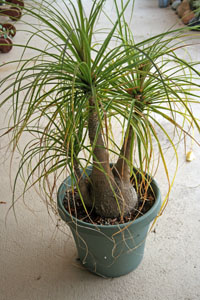 Ponytail palm does best in full sun in a well-drained soil mix (as would be used for cactus). Add sharp sand and/or small gravel to regular potting mixes to enhance drainage. This desert plant is adapted to bright light, so place it in a window where it will receive as much light as possible. Plants can be moved outside for the summer but should be gradually acclimated to their new conditions outside to prevent sunburn.

In nature the plants would receive rainfall in the summer and remain dry through most of the winter. These conditions should be mimicked for container-grown plants – water deeply, but infrequently, allow to dry out between waterings, and reduce watering significantly in winter to avoid root rot.

The author with his blooming plant

Overwatering is the most common cause of failure for this plant. Fertilize once or twice during the growing season. This plant is propagated only by seed, which is not commonly available. Sow in spring with a minimum temperature of 68°F. The seed should germinate readily with no special treatment.

This plant is quite easy to grow, tolerating a wide range of conditions, and is a good choice for beginners. In containers ponytail palms will grow slower than if in the ground, and the plants will remain small if kept in a small pot. They can go for many years before needing to be repotted. Moving it to a larger pot will give it room to grow in both height and girth. They can be very long-lived and can easily outlive their owners. However, older plants may be difficult to manage because of sheer size and weight if not kept on the smaller size.

Ponytail palm has few pests, but mealybugs or scale can be a problem. Leaf tips have a tendency to dry and be brown in the house, either from too much or not enough water, excessive fertilizer or accumulated salts. The dead parts can be trimmed off to improve the plant’s appearance.