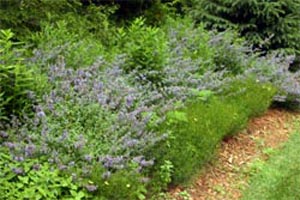 The Perennial Plant Association selected Nepeta xfaassenii ‘Walker’s Low’ as their Plant of the Year 2007. This herbaceous perennial in the mint family (Lamiaceae) is hardy in zones 3-8. The common name for the genus Nepeta – catmint – comes from the attractiveness to cats of the aromatic volatiles released from the broken stems of some plants in this genus, especially catnip (N. cataria). This species is not particularly attractive to cats, though some may be interested in it. This species is a hybrid of N. racemosa and N. nepetella and is named for Dutch nurseryman J.H. Faassen who developed the first hybrids. This cultivar was developed in England and is named for a garden there, not for the plant’s size.

‘Walker’s Low’ has aromatic, gray-green to silvery foliage and produces profuse soft lavender-blue flowers over a long period from early summer through fall. Bees, butterflies and hummingbirds are attracted to the flowers. 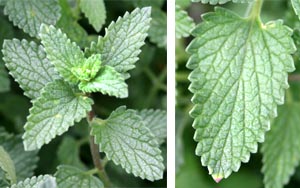 The oval leaves have scalloped edges.

The opposite leaves are 1-2″ long with scalloped edges. The plant has 2-3 foot stems but because of its arching habit the clumps are only 1½ -2 feet high if not staked. This variety does not flop as much as some catmints. It tolerates hot summer temperatures and is fairly drought resistant once established. 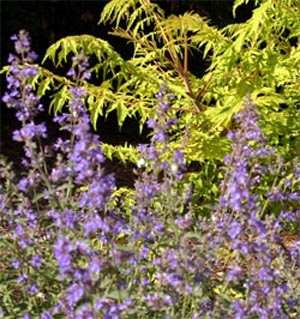 Nepeta xfaassenii ‘Walker’s Low’ has a clean-cut look and provides a good show of color nearly all summer, making it a good choice for the front of a border. It is also useful as a tall edging and in herb gardens. It can be used as a ground cover, cascading over walls, or in containers. It is very effective planted in large masses or drifts. Catmint combines well with roses, beebalm, Shasta daisies, and ornamental grasses with blue foliage. The flowers make a nice contrast to bright orange tulips and daylilies, and harmonize well with soft yellow flowers, such as, yellow foxglove (Digitalis grandiflora), Coreopsis ‘Moonbeam’ and lemon yellow daylilies such as ‘Bitsy,’ ‘Hyperion’ or many other cultivars. 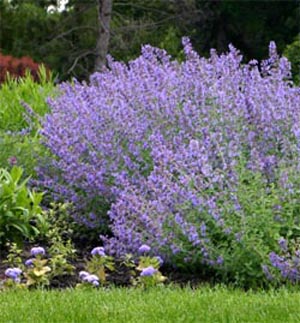 Other cultivars of catmint grow taller than ‘Walker’s Low’.

Catmint grows well in full sun and any well-drained soil, although it will tolerate light shade. Once established, it tolerates drought (but grows better when well-watered). Shear the plant back in spring for more compact habit. Cutting back plants by half to a third after the initial flush of flowers fade will promote reblooming and a more attractive appearance later it the season. ‘

Walker’s Low’ is supposedly sterile and therefore will not set seed. The best method of propagation is by division in spring or from soft wood cuttings taken in summer (June and July). Non-flowering side shoots about 3 inches long should root in about 4 weeks.

Catmint has few pest problems and is not bothered by deer or rabbits. Maintain proper plant spacing to reduce problems with powdery mildew.

Some cultivars have white flowers.

In addition to ‘Walker’s Low’, there are many other cultivars of N. xfaassenii, including: