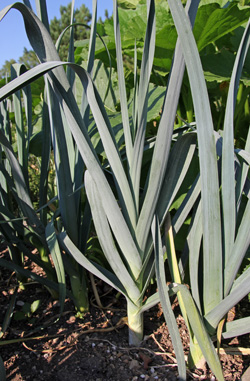 Leeks growing in a garden.

Leeks (Allium porrum or A. ampeloprasum var. porrum), sometimes called “the gourmet’s onion” are related to onions (A. cepa) and garlic (A. sativum) but have flat leaves instead of tubular and relatively little bulb development. They’re easy to grow and delicious with a taste all their own, very much like a mild onion. The thick leaf bases and slightly developed bulb look like a giant green onion and are eaten as a cooked vegetable. Leeks are not as popular in the United States as they are in Europe, where they are known as “poor man’s asparagus.

The leek was developed from a wild type, which is native to Western Asia and the Mediterranean countries. Wild leeks were used as food during the early Bronze Age, around 4000 B.C., and were probably domesticated around 2000 B.C. They were part of the diet of those who built the Egyptian pyramids, and Hippocrates, the father of medicine, prescribed the leek as a cure for nosebleeds. Leeks have been cultivated in Western Europe since the Middle Ages, and are particularly associated with Wales – dating back to 640 AD when Welsh soldiers wore pieces of leek in their helmets to distinguish themselves from their Saxon foes in battle. The Welsh traditionally wear a leek on St. David’s Day (March 1) to commemorate King Cadawallader’s victory over the Saxons that year. Leeks were brought to North America with early settlers from Europe. Today leeks are grown as an excellent substitute for onions and for its own unique mild onion flavor in soups and other dishes. 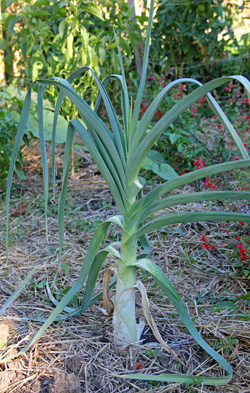 Leeks have long, strap-like leaves and many develop a roundish bulb.

This plant is a true perennial, even though it is generally referred to as a biennial. It multiplies by means of small lateral growths and often develops a roundish bulb at the base of the main growth. Leeks develop a broad, succulent stem rather than a large bulb like an onion. The plant has a fanlike sheaf of flat, blue-green or yellow-green leaves that may grow a foot or two in length, on a stalk up to 12 inches long. Types vary in the length and thickness of the leaf shanks (pseudo-stem). 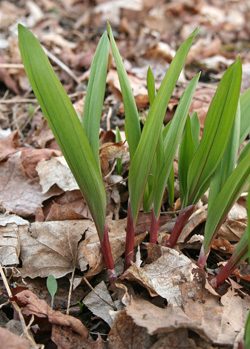 Some plants that are very similar to leeks include elephant (or great-headed) garlic (A. ampeloprasum var. ampeloprasum), kurrat or Egyptian leek (A. kurrat) and wild leek (A. tricoccum). Elephant garlic produces very large bulbs that may weigh a pound or more, and is used as is garlic. The kurrat is grown around the Mediterranean and in the Middle East for its leaves, which can be harvested several times a year. Wild leeks, also called ramps, are native to North America and have a strong garlic-onion flavor. 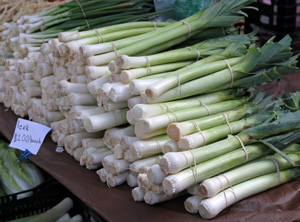 Leeks are common at farmers markets in the fall. 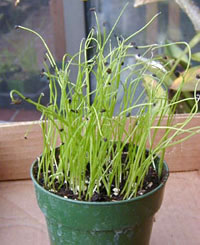 In the Midwest leeks are best started indoors.

Leeks are a cool-season crop, so are well suited for cultivation in Wisconsin. They do best in full sun in light, well-drained soil. They are more successful in heavier soils than onions. They are also a rather long-season crop (80-120 days). In short-season Wisconsin, it is best to start seeds indoors 4 to 10 weeks before the average date of last frost and transplant the seedlings into the garden. Sow the seeds thinly and evenly 1/4 inch deep in moistened soilless potting mix and cover them lightly with vermiculite or sand. Keep the soil temperature at about 70°F until the seeds germinate. Move the seedlings under grow lights or into a very bright window. Thinning the seedlings will encourage more rapid growth but it isn’t necessary if you keep them well fertilized. When the grass-like seedlings get to be 6-7 inches long, cut them back to 1½ – 2 inches (you can use the part you cut off as you would chives). Harden off the plants before transplanting into the garden starting in late April or early May (the plants will tolerate light frost). You can also transplant later or sow seed directly outdoors for smaller plants. In the southern part of the state, you may be able to successfully overwinter some late-planted varieties in mild winters but in most cases even though they are described as “winter hardy” they will not survive our winter. 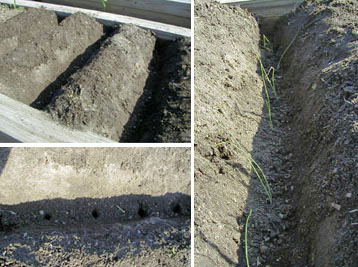 Planting leeks in the bottom of a trench makes it easy to gradually add soil as they grow to blanch the stems.

In order to grow a large, white leek the lower part of the stem must be blanched. This can be accomplished by hilling the soil up around the stalk as it develops. Alternatively, you can plant into a trench 6-8 inches deep and then gradually fill the trench up as the plant grows. In either case, place the young transplants up to the first leaf notch into holes about 6 inches deep (a rake handle is great for making perfect holes). Don’t fill the holes with soil after planting but just water the plants in and let the hole fill up with soil on its own. Make the holes 6 to 9 inches apart in the home garden. If you plant in a double row, stagger the plants with their leaves growing parallel to the rows so they won’t grow into the pathway. For larger plantings, plant at 4 to 6-inch spacing in rows that are 18 to 24 inches apart to allow soil to be moved from between the rows around the plants for blanching the stems. Because leeks are relatively slow-growing, they can be interplanted with faster maturing crops such as lettuce. Avoid planting beans or other legumes nearby as the leeks can inhibit their growth.

Midseason fertilization is recommended. In mid-summer, cut off the top half of the leaves to encourage greater stalk growth. 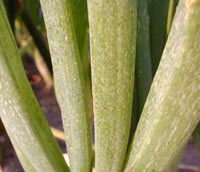 Leeks don’t have many pests but most insects and diseases that attack onions can also affect leeks. Onion thrips (Thrips tabaci) are quite common, but cause problems mainly under hot, dry conditions. Their feeding produces tiny silvery-white spots on the leaf surface. Onion maggot (Hylemya antiqua) can feed on the plant’s roots, causing wilting and reduced growth. Diseases such as white rot, rust, pink root, purple blotch, downy mildew, botrytis leaf spot, botrytis neck rot, and smudge may occur, but are not common in home gardens. 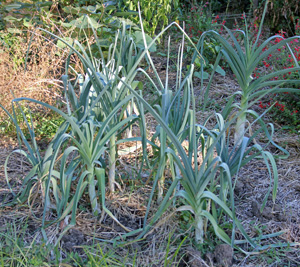 Leeks can remain in the ground as long as it is not frozen.

Leeks do not go dormant in the fall but continue to grow slowly, so harvest time can be very flexible. Dig leeks any time after they are an inch or more in diameter, but leave them in the ground until you’re ready to use them. 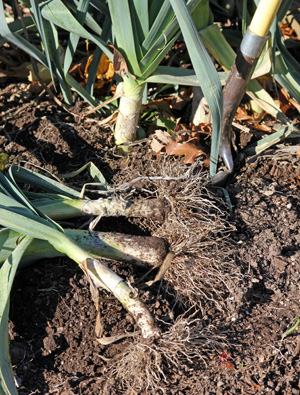 Dig leeks to harvest any time after they are an inch or more in diameter.

You can continue to harvest them through a mild winter and into early spring. Put an extra thick layer of mulch around the plants to delay the freezing of the ground and make it easier to dig them up. In a more typical Wisconsin winter, dig the plants before the ground freezes solid. Strip off the dead outer leaves and trim the roots and leaves after digging.

Leeks are stored commercially for 2 to 3 months at 32°F and high relative humidity ( to prevent wilting).

They will keep in your refrigerator for at least a month but the quality will not be as good as when freshly harvested. The variety and packaging will affect the storage life. Digging the plant up doesn’t stop it’s growth – it will continue to grow (very slowly) for months even under refrigeration but this growth reduces the quality of the stems.

Generally only the white part of leeks are consumed.