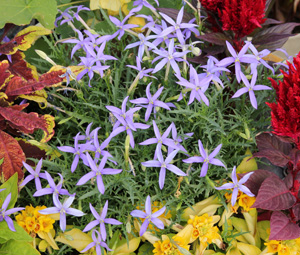 Laurentia is a perennial grown as an annual.

Isotoma axillaris is a heat-loving plant native to Australia that is hardy in zones 7-10 but is easily grown as an annual in colder climates. The common name laurentia comes from its previous classification as Laurentia axillaries; that name, as well as another synonym, Solenopsis axillaris, is still often used in the nursery industry. This species in the bellflower family (Campanulaceae) has other common names including blue star or star flower. 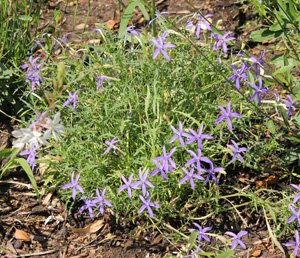 Plants have a mounded form.

Plants have a compact, mounded habit growing 12-15″ tall and wide. The soft, ferny green foliage has a fine texture. 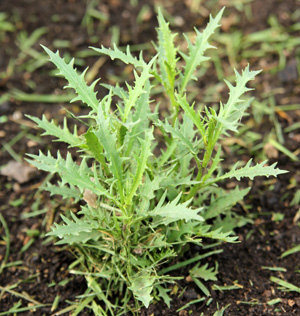 The elongated, pinnatisect leaves with narrow lobes are produced on upright, branched stems from a woody base. 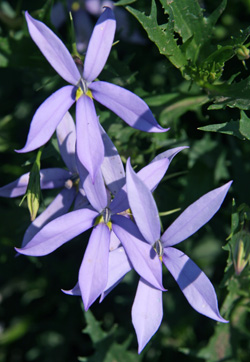 The star-shaped flowers may be blue, pink or white. 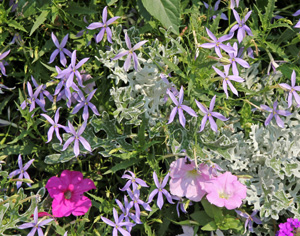 Laurentia combines well with other plants as a filler.

Use laurentia in borders and in containers as a filler plant. As a low plant it is useful as a soft edger along beds or paths or as a ground cover if planted densely. It can be grown in hanging baskets or as a bedding plant, and looks nice spilling over walls. The soft blue of the flowers combines well with other pastel-colored flowers and the fine texture of its foliage contrasts nicely when placed near plants with coarse foliage, such as heucheras. 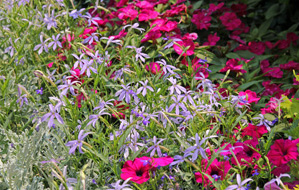 Grow laurentia in full sun to partial shade. Purchase plants in spring or grow from seed or cuttings. Seeds should be sown indoors very early (February) as it takes about 4 months for the plants to come into flower. Place plants in the garden after the last frost. This plant has few pests, although it can be attacked by m 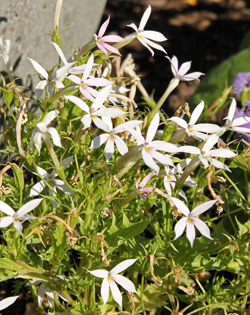 A white cultivar of laurentia.

ealybugs, and is not favored by deer or rabbits.

Beth’s Blue® is one of the most commonly available cultivars in the nursery trade with true blue flowers.