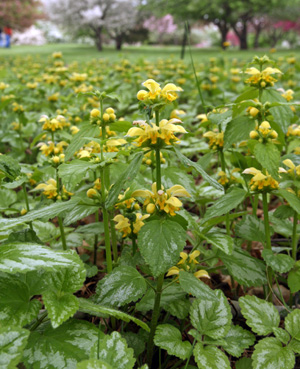 Yellow archangel is the common name of Lamiastrum galeobolon, an herbaceous perennial plant used as a low-growing ornamental. Lamiastrum means “resembling Lamium“, referring to the similar-looking deadnettles that are also grown as ornamental ground covers. This species was once classified as Lamium galeobdolon; that name and the synonym Galeobdolon luteum are still occasionally misused in the nursery trade. This Eurasian native in the mint family (Lamiaceae) is hardy in zones 4-9. Variegated forms of this plant are popular garden plants but the species is considered a noxious weed in western Washington State and other areas of the Pacific Northwest where it has escaped cultivation and invaded forested areas. It has the potential to spread into natural areas in Wisconsin, although is not considered invasive here and is not proposed for regulation at this time. 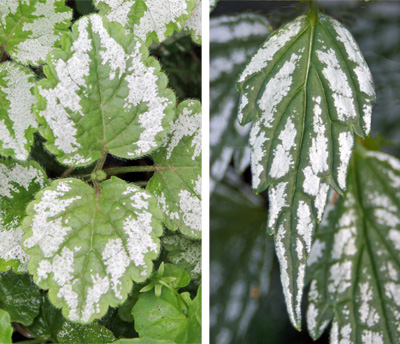 The leaves of cultivated varieties of yellow archangel are variegated with silver markings.

The elliptical to triangular leaves have coarsely toothed edges, an acute tip and are covered with fine hairs. They are medium to dark green but cultivated forms are variegated with silver markings. The opposite leaves are borne on square stems (typical of the mint family). Plants are semi-evergreen, retaining their leaves through mild winters but dying back to the ground in cold climates in the winter and re-emerging in early spring. Plants grow up to a foot tall as a procumbent mat. This creeping plant spreads by rooting at nodes, from stem and root fragments, and by seed. 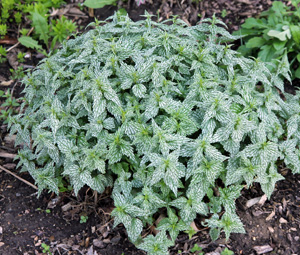 One of the most commonly grown cultivars is the more upright ‘Hermann’s Pride’ with narrow leaves with serrated edges, appearing sharply streaked and spotted with bright silver that stands out from the dark green veins. This cultivar grows as a slowly spreading clump and is more behaved than the more trailing types. The most common vining or rambling cultivar is ‘Variegatum’ (or as ‘Variegata’) 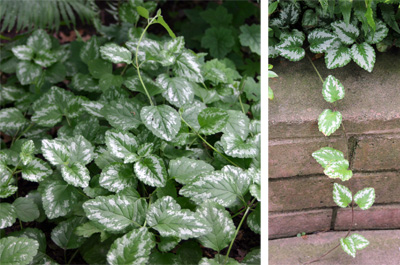 with diffuse, mottled silvery markings on the more rounded leaves.

L. galeobdolon blooms for a few weeks in mid-spring, with a few flowers produced sporadically later in the year. The soft yellow flowers are borne in leafy inflorescences called verticillasters (resembling whorls but actually arising in the axils of opposite bracts; the tip continues to grow, producing more rings of flowers up the stem). Each ¾” long tubular flower has a prominent upper petal or “hood” and lower lip characteristic of the mint family. The lower lip is usually streaked red brown. The flowers are pollinated by bees – especially bumblebees – and are followed by inconspicuous brown nutlets hidden among the inflorescence leaves. Numerous seeds are produced from each inflorescence, with more in sunnier areas.

When in bloom (L), the flowers of yellow archangel are borne in verticillasters (C), and each tubular flower has a prominent upper petal or hood and lower lip characteristic of the mint family (R). 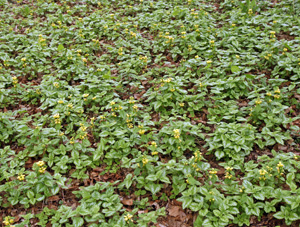 Trailing cultivars of yellow archangel, such as ‘Variegatum’ in this picture, makes a dense groundcover that outcompetes most other plants.

Yellow archangel is easily grown in most conditions from part sun to full shade in many types of soil. Although it prefers moist soil and growth will be more dense under those conditions, it tolerates drought and dry sites. Silver-variegated trailing forms can be used in hanging baskets or to make a dense ground cover that out-competes most other plants. The clump-forming ‘Hermann’s Pride’ is probably a better choice in gardens as it is not as aggressive as the species or other selections and makes a good addition to borders and shady beds. It combines well with other shade-loving perennials including ferns, 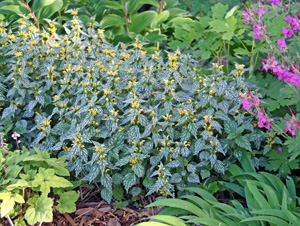 The clump-forming ‘Hermann’s Pride’ combines well with other shade-loving perennials.

This plant has few pests, although slugs may cause cosmetic damage. Fallen leaves may get trapped in the trailing types, looking unsightly, especially where the leaves remain evergreen. The cultivars can be propagated at any time during the growing season by division of crowns or from rooted stem cuttings.