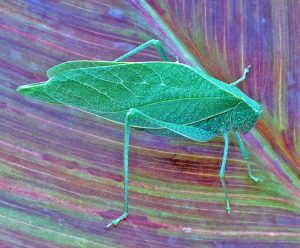 Katydids are a large group of insects in the order Orthoptera, related to grasshoppers and crickets. Some katydids have been called long-horned grasshoppers because of their long and slender shape, but actually katydids are more closely related to crickets than to any type of grasshopper. There are about 6,400 species worldwide, with the greatest diversity in the tropics. Their classification is not well established, with taxonomists differing in their classification schemes. Most North American species are placed in the family Tettigoniidae and divided among seven to ten subfamilies. The main groups of commonly encountered katydids include the true katydids (Pseudophyllinae), false katydids (Phaneropterinae), shield-backed katydids (Tettigoniinae – but sometimes divided into three subfamilies), meadow katydids (Conocephalinae) and coneheaded katydids (Copiphorinae, but sometimes these are included with the meadow katydids). There are about 255 species in North American and 20 species in the Midwest. 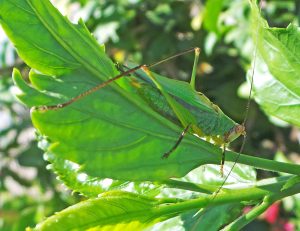 Katydids are usually green and camouflaged to blend in with foliage, more commonly heard than seen. They have a body taller than it is wide and thin and hind legs that are longer than the other pairs of legs. Some characteristics that distinguish katydids from other orthopterans include having the wings held vertically over body (like a roof of a house), hearing organs on the front tibia, all tarsi with 4 segments (crickets have 3), a typically flattened and sword-like ovipositor, and very long, thin antennae as long as or longer than the body (in grasshoppers the antennae are always relatively short and thickened).

Katydids have thin antennae that are as long or longer than the body, often much longer as in this brown Costa Rican katydid.

The antennae are covered with sensory receptors that help them find their way around in the dark, since they are primarily nocturnal. Depending on the species, they can be from ½ to 4 inches long. Females tend to be larger than males and have a noticeable ovipositor at the end of the abdomen for laying eggs in plant stems or into the ground. 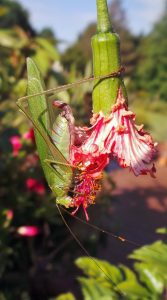 Many species are leaf-shaped to blend in even better with their environment to prevent predation. During the day they rest in a specific diurnal roosting posture to make them look even more like just a leaf on the plant. Wing form varies widely, with most having long wings that cover the body, but some species have short wings or are nearly wingless. They tend to be poor flyers, and some only flutter their wings during leaps.

Every so often a pink katydid shows up. It’s been estimated that pink coloration occurs in one of about 500 individuals, a condition called erythrism. It is caused by recessive genes, similar to the situation for albino animals. The New Orleans Audubon Insectarium acquired a pink male and a pink female katydid to produce a brood of pink katydids which are now on display there. These individuals would really stand out in their normal green environment and therefore would not be likely to survive as predators could find them too easily. But in the protected insectarium they grow and live just like regular green katydids. 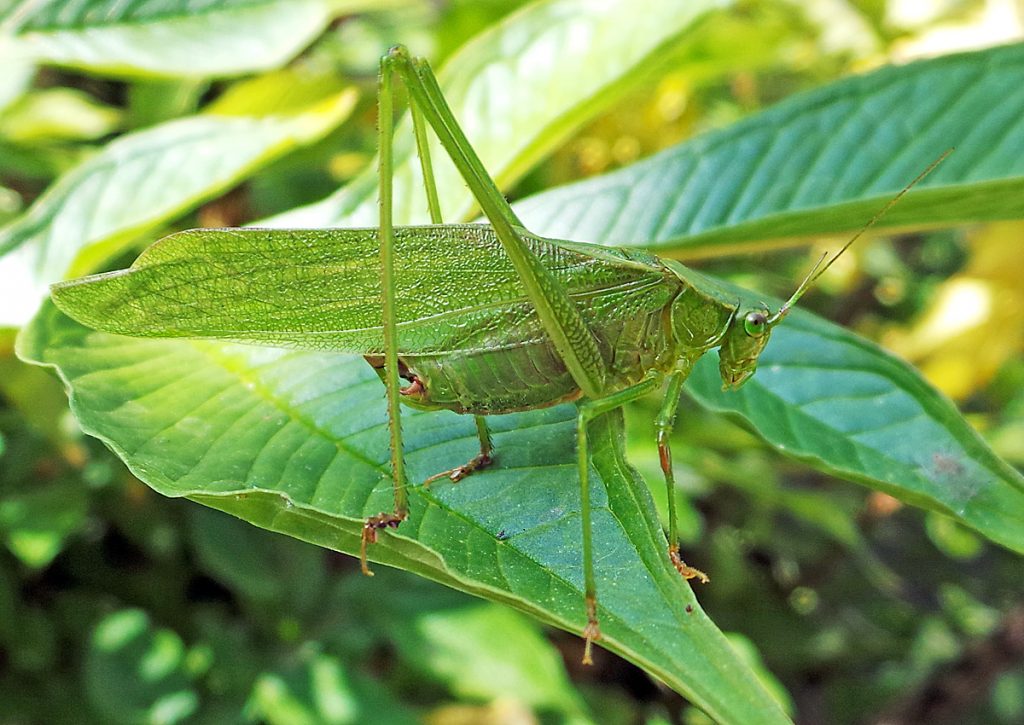 In our area katydids overwinter as eggs. Females deposit eggs in soil, plant stems or tree bark in late summer or fall. The adults die off, and the following spring the eggs hatch into nymphs. These generally resemble the adults except they are smaller and lack fully developed wings and reproductive organs. A few will look different than the adults. As the insects go through incomplete metamorphosis the wings gradually appear through generally five successive molts. Depending on the species, the female’s ovipositor may be short and curved like a sickle or long and saber-like. Those species with sickle-shaped ovipositors typically lay eggs in plant stems while those with elongate ovipositors generally lay eggs in grass stems. 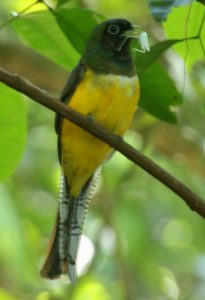 Katydids are an important food of many birds, including this black-headed trogon in Costa Rica.

Like other Orthoptera, katydids have chewing mouthparts, and most are herbaceous but rarely cause significant plant damage to crops or ornamental plants. You may find some feeding on leaves and flowers in your garden or on your potted plants, especially in late summer. Some, especially in the tropics, are predaceous, feeding on other insects or eggs. Many are nocturnal, but some are active during the day. They tend to be found in grasslands, open woods and along edges of plantings in suburban or rural areas, with many species in the treetops. They an important food for many animals, including birds, bats, rodents, tree frogs, spiders, and praying mantids.

The rasping sounds created by the common true katydid (Pterophylla camellifolia), native to much of the eastern US and into southern Wisconsin, is said to resemble the sound of the words “Katy Did! Katy Didn’t! Katy Did! Katy Didn’t!”, hence the common name for these insects – but not all katydids make this classic sound. Each species has its own songs, with reproductive, territorial, aggressive, or defensive purposes. Males are mainly responsible for these songs, but in some groups the sexes form duets. Sounds produced by other species include continuous songs known as trills and a variety of clicks and buzzes created by stridulation (friction), all produced by special structures on the front wings. There is a rigid “scraper” on one forewing that they rub against a comb-like “file” on the other. The size of the insect, the spacing of the ridges and the width of the scraper determine what sound is made. Some kinds of katydids have an ultrasonic call, while a few produce vibrations by thumping on twigs that are detected by other katydids. In order to detect these sounds, katydids have a tympanum, a slit-like or flat patch on each front leg, which functions as an “ear” to detect these sounds (plural = tympana). They raise a leg to help pick up the sound. Calls can be heard both day and night, but in our area katydids generally start late at night and continue into the early morning hours in late summer, with quick bursts of two, three or four zitzing notes. Males nearby often alternate their songs in a back and forth melody. As temperatures decrease in the fall, the songs grow slower and usually end by October. 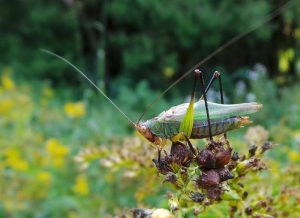 Males call to attract females. There is a lot of competition between males, and females try to select healthier males, judging their fitness by the sound of their trill (louder and more fluent is better). When the insects mate, the male passes a sperm packet (spermatophore) to the female. The males increase their chance of reproductive success by providing additional protein (a spermatophylax, which may require as much as 40% of his body weight to produce) attached to the spermatophore for the female to eat to help her develop her eggs. In species that produce large food gifts, the female is the one that seeks a mate. Males that produce large food gifts mate one or two times in their lifetime, while males that produce smaller gifts can mate more times, but are less likely to be selected by females.