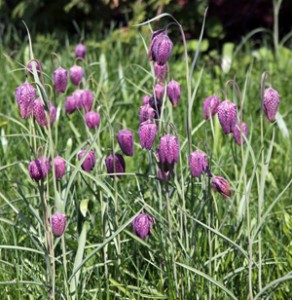 Fritillaria meleagris is one of about 100 species in the genus Fritillaria, a group of herbaceous bulbs in the lily family (Lilaceae). The name meleagris means “spotted like a guinea fowl”. With common names including guinea hen flower (the pattern on the flowers resembles the patterning on guinea hens), leper lily (because the flower shape resembles the warning bell once carried by lepers), chess flower, frog-cup, chequered lily, and snake’s head fritillary, this species is rarely found in the wild but is commonly grown as an ornamental in gardens. Native to grassy flood plains and meadows of Europe from southern England to Russia, these bulbs are hardy in zones 3-8. They are one of the less commonly grown small spring bulbs but have been cultivated for centuries – it was a regular feature in Elizabethan gardens, dating back to at least 1572. 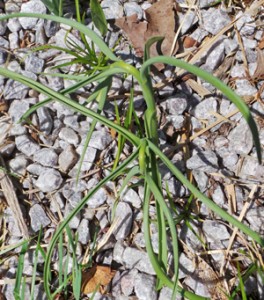 The plants have an open habit with widely spaced leaves.

In the spring grassy, widely-spaced alternate leaves are produced from the small bulbs, tightly encircling the flower buds. The plants have a loose, open growth habit, and the light-grey foliage twists and turns, often laying on the ground (sort of like tiny snakes) or may stand upright 6-12 inches tall. The thin foliage dies back in early summer as soon as seed pods have ripened.

The nodding flowers have 6 patterned tepals.

Guinea hen flowers appear in mid-spring either singly or in pairs on the ends of delicate, upright, arching stems rising above the foliage. The nodding flowers are about 2” long, with six pointed tepals. Each square-shouldered bell sports a distinct, but variable, checkered or mosaic pattern in shades of maroon, dark purple, reddish purple, and/or muddy pink. And unlike the related crown imperial, the flowers do not smell. If pollinated, the stems straighten again so that the typical lily seed pods are held upright. Each pod contains six stacks of dark, flattened triangular seeds. 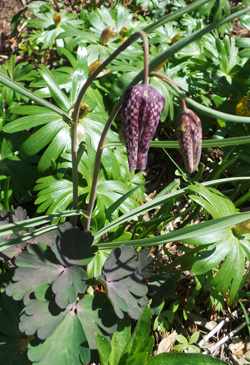 This small bulb is right at home with other spring bulbs in cultivated beds, cottage gardens, rock gardens, and moist sandy meadows, but it can be hard to site them so as to be easily observed. Because the plants are relatively small, place them in groups near the front of the border or where the tiny flowers can be viewed up close to appreciate the subtle designs; from a distance the flowers don’t show up well because of the dark coloring. The small, dark (described as “gothic” by some) flowers contrast well with small brightly colored daffodils (such as ‘Tete-a-Tete’ or ‘Jetfire’) or other small spring bulbs. Guinea hen flower combines well with marsh marigolds (Caltha palustris), astilbe, columbine, Pulmonaria, and other plants that prefer soils on the moister side. 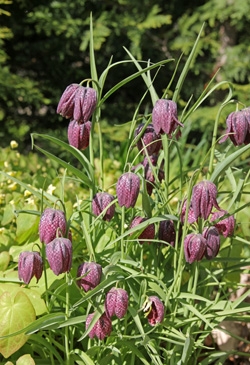 Guinea hen flower is at home in the meadow garden, cottage garden or rock garden.

Because of its slender profile, it can easily be tucked in among perennials and won’t leave large gaps in the garden like clumps of daffodils or tulips would. It can be used in masses or sprinkled throughout an area. Under ideal conditions this bulb will multiply and naturalize, spreading readily by seed, but they are not considered invasive. 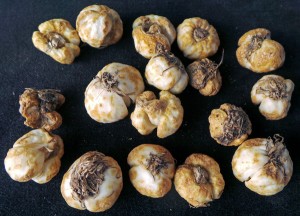 Plant the non-tunicated bulbs on their side a few inches deep.

Grow guinea hen flower in fertile, well-drained soil and in full sun or partial shade. These bulbs need moist soil even when dormant, and thrive in most soil types from sandy to clay soils as long as they do not remain too wet or too dry. The ivory-white, non-tunicated bulbs should be planted in early fall as they are prone to drying out quickly (more so than other types of spring bulbs, like tulips or daffodils, that have a dry covering) and do not store really well. To be sure they are growing, the bulbs can be kept in moist peat until shoots or roots just begin developing and then planting out in the garden. 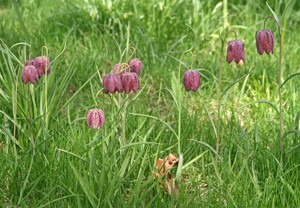 Place the button-shaped bulbs 2-4 inches deep (to about three times its height) and the same distance apart. Placing them on their sides will help to avoid water collecting in the hollow crowns and prevent the bulbs from rotting. Sometimes potted specimens are available in the spring for transplanting into the garden. Guinea hen flower can be propagated from seed, from tiny rice-grain-sized bulblets that are loosely attached to the disk-shaped main bulb, and large clumps can be carefully divided after flowering. Seeds need a period of cold to break dormancy, and germination can be irregular, often over several months, and. The seed can be sown in fall seed in a cold frame or will have to be stratified for 2-3 weeks if started indoors. Seed should be kept moist but not wet at all times. Plants grown from seed or bulblets should flower in the third season. F. meleagris is not favored by deer, is generally not bothered by squirrels and rodents, and is not affected by juglone, so can be planted near black walnut trees. 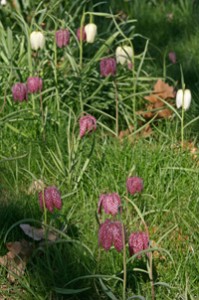 Mixtures or individual cultivars may be available.

This bulb can also be forced without chilling required. Just pot the small bulbs and keep them at 50-60F for several weeks.

Bulbs of guinea hen flower are usually sold as mixed colors but occasionally specific varieties or cultivars are available including: