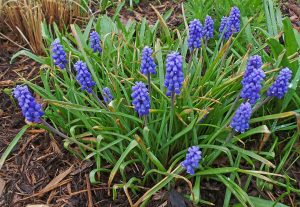 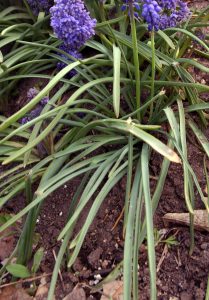 Grape hyacinth (Muscari armeniacum) is a mid-spring blooming, perennial bulb in the Lily Family (Liliaceae) native to southeastern Europe. It is not a true hyacinth (genus Hyacinthus). The name of the genus, Muscari, comes from the Greek word for musk, referring to the scent produced by the flowers of many species in the genus. The common name comes from the resemblance of the clusters of the small, bell-shaped, cobalt-blue flowers to upside-down clusters of grapes. Grape hyacinth is hardy in zones 3-9.

Long, linear, floppy green leaves emerge from the ground in early spring and are soon followed by the flowers. The foliage dies back following flowering in the early summer but unlike many other spring-blooming bulbs, it starts growing actively again in mid-fall and persists through mild winters. 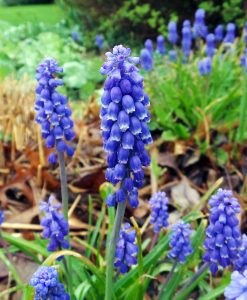 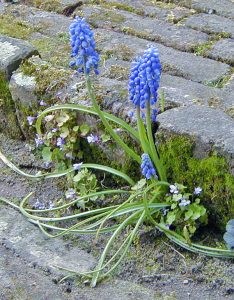 Each bulb produces one to three 4-8 inch high flower stalks with 20-40 tightly packed flowers per stalk. Each bell-shaped floret has a thin white band on the rim. Most have a mildly sweet fragrance variously described as slightly grassy or grapey. They are excellent as cut flowers and can be used for indoor forcing. The flowers open sequentially from the bottom up the inflorescence, with the lowest flowers withering as the top ones open. Pollinated flowers are followed by tripartite seed pods. They readily naturalize, reproducing by division and self-seeding, and may even become invasive in some situations.

Grape hyacinth produces 1-3 flower stalks per bulb (L), with 20-40 tightly packed florets (LC). Each bell-shaped floret has a white band on the rim (C). The flowers open from the bottom up the inflorescence (RC) and if pollinated are followed by tripartite seed pods (R). 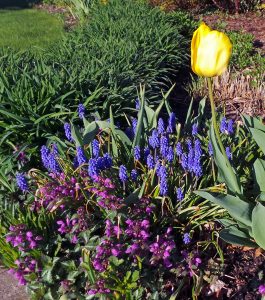 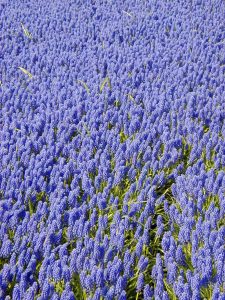 A mass planting of Muscari.

Grape hyacinths are good for planting in rock gardens, in the front of beds and borders, or along walkways and paths. They mix well with other early blooming bulbs, and are a popular container plant. They look best in masses and loose drifts and are particularly nice when allowed to naturalize under trees and shrubs.

There is a famous planting of grape hyacinth at Keukenhof Gardens in The Netherlands known as the Blue River. This dense planting of M. armeniacum winds past trees, shrubs, and other spring flowers, giving the illusion of a flowing blue river. You can try planting a large drift of grape hyacinth in your garden for a similar effect – but you’ll need a lot of bulbs!

Displays of blue grape hyacinths, including the “Blue River” (RC) at Keukenhof Gardens, The Netherlands.

Grow grape hyacinth in well-drained soil in sun to shade. Place in full sun for maximum vigor. However, the flowers last longer in partial shade.

Plant the bulbs in the fall, placing bulbs 3 to 4 inches deep and 2 inches apart. The plants benefit from bone meal applied at planting and after blooming. Reduce watering after the foliage begins to die back. 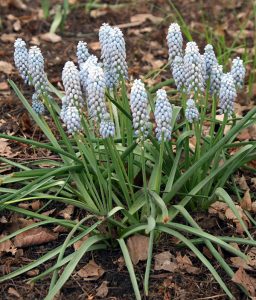 There are several varieties of this species (or M. botryoides, another early spring bloomer that is virtually indistinguishable in appearance from M. armeniacum).

There are about 40 species of Muscari, but only a few are widely available.