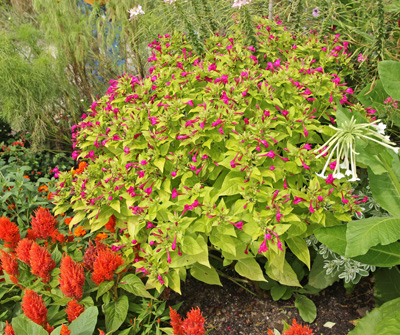 The common name of four o’clocks was given to Mirabilis jalapa because the flowers of this plant do not open until late in the day. This old-fashioned garden ornamental in the four-o’clock family (Nyctaginaceae) is a tender perennial hardy in Zones 7-10, generally grown as an annual throughout most of the US. Native to tropical South America in the Andes – and also sometimes called Marvel of Peru – it is the most commonly grown ornamental species of Mirabilis. Discovered by Europeans in 1540, the root was used by indigenous peoples for medicinal purposes, as a hallucinogen, and as a purported aphrodisiac, while the flowers produce an edible red dye for coloring food. 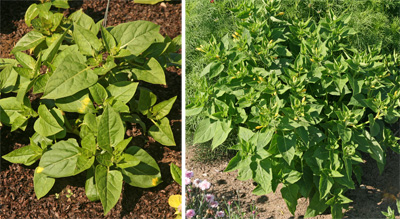 The shrub-like, erect and spreading, multi-branched plants grow 2-3 feet tall and wide. The weak and brittle stems break easily and flop over if not supported. They are light or bright green but may have a yellow or pink hue. The opposite, ovate, bright green leaves are up to 4 inches long with a pointed end. 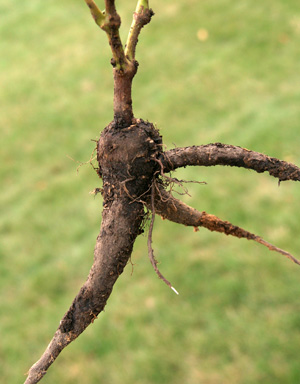 The swollen root of MIrabils jalapa.

They are triangular to egg-shaped to lance-shaped, with smooth (non-toothed) edges. The plants produce elongated, dark-colored, swollen to tuberous taproots that can be a foot or more long and weigh up to 40 pounds in climates where they are perennial.

Flowers are produced in bright and pastel shades of white, yellow, pink, magenta, and red. Flowers of different colors can be found on the same plant – either simultaneously or at different times – and flowers may even be bicolored, speckled, or variegated.

Four o’clocks come in a variety of shades and colors.

They bloom in summer through fall and may have a strong, sweet-smelling fragrance when open (but sometimes have no noticeable scent). Flowers are borne in terminal or axillary clusters of one to several flowers. The colorful, trumpet-shaped portion of the flower is the pigmented calyx or partially fused sepals; the flowers actually have no petals. Each flower is about two inches long and abruptly flares out to about an inch across at the end with five lobes. These tubular flowers open late in the day or in the evening (although they will open earlier open earlier on rainy or very cloudy afternoons) as they are pollinated by sphinx moths (family Sphingidae) and other nocturnal pollinators with long tongues. Hummingbirds and butterflies are also attracted to the flowers.

The flower buds (L), open flower (LC), fading flower in the morning (RC), and plant with many spent flowers (R).

The flowers wilt by the following morning and those faded flowers are not self-shedding, remaining on the plant – so some people may not like the appearance. Numerous large, dark, leathery, 5-ribbed, spherical “seeds” (actually a fruit that is a nut-like achene) with a wrinkled surface are produced in the fall. These are poisonous if ingested. They can also self-seed under the right conditions and have become naturalized in some parts of the southern U.S.

The wrinkled, dark-colored fruits on the plant (L and C) and harvested (R). 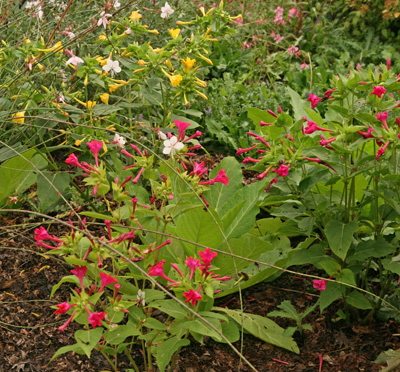 Grow four o’clocks in full sun in almost any type of soil but they do best in a humus-rich, well-drained spot.  Plants can be started from seed sown outdoors after the danger of frost has passed or indoors up to 8 weeks ahead of time. Soaking the seeds in water overnight will speed up germination. Sow the seeds no more than ¼ inch deep as light aids germination. They should germinate in 1-3 weeks.  Transplant seedlings when large enough to handle, if needed, into individual. Thin seedling or place transplants 12-24 inches apart.

As these are tender plants, put transplants outside after all risk of frost, about the same time you would plant tomatoes. Provide moderate moisture and fertilize periodically for the best growth. They have few pests and are not favored by deer. Tubers can be dug in the fall to store indoors and plant again in spring after the last frost. Treat the tubers like dahlias by digging them before the first freeze, shaking off the soil and storing them in dry, cool but frost-free conditions. 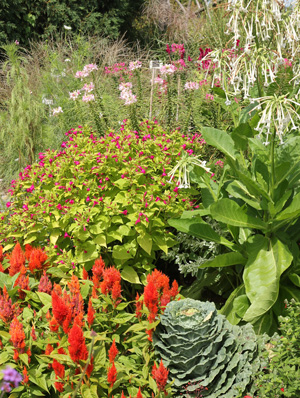 Four o’clocks are a good addition to an annual garden.

This sturdy plant can be used as an annual hedge if planted close together. They are right at home in a cottage garden, in borders and beds, or can be added to large containers. If possible place them along on lighted walkways where the night-blooming flowers and fragrance can be appreciated. They combine nicely with Asiatic lilies, creating an interesting contrast of large and small flowers.

There are some cultivars and hybrids of four o’clocks, although they are often offered just as ”Four O’Clocks”.