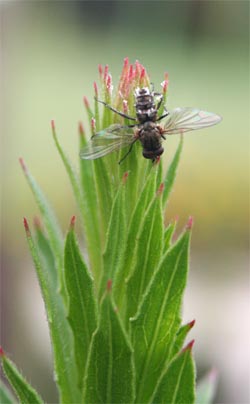 A dead fly at the top of a plant was likely killed by the fungus Entomophthora muscae.

Have you ever noticed a dead fly hanging from a flower stalk, a tall grass stem, or even glued to the window in your house, maybe with a puffy white-striped abdomen or a white halo encircling the body on the glass? If it was a house fly (Musca domestica), cluster fly (Pollenia rudis) or a related fly species, it was most likely killed by the fungus Entomophthora muscae. The word Entomophthora means “insect destroyer.” There are over 50 species in this genus of fungi that infect various types of insects. A related species, Entomophaga maimaiga, commonly infects gypsy moth in Wisconsin. Most species are very host specific, infecting only a certain species of insect or a group of closely related insects. For example, E. muscae is only pathogenic to certain types of flies (higher Diptera, in the Cyclorrhapa). The species is really a complex that includes several main types (differentiated by spore size and host range among other characteristics) that are found within many different fly families. The many different genotypes in the different groups may each be restricted to a single host species. The related E. syrphi infects only syrphid flies (hover flies or flower flies) and does not affect houseflies. 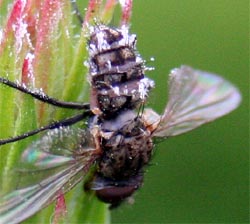 Fungus beginning to come out of killed fly.

The fungus is transmitted by airborne spores and only affects adult flies. When a spore settles on an appropriate fly’s body, it germinates and penetrates through the fly’s exoskeleton, often through one of the many intersegmental membranes between the harder parts of the exoskeleton. The fungal hyphae grow throughout the body of the fly, growing enough to distend the abdomen by the time the fly dies. As the body is distended, the light colored membranes between the darker hard segments are exposed, giving the fly a characteristically striped appearance. Eventually the fungal hyphae force small cracks in the intersegmental areas of the abdomen. Under the right conditions, the fungus produces numerous sporangia (spore-bearing structures), each with a single spore, that grow out of these cracks, giving the fly a fluffy white appearance. When these spores (conidia) are released, they shower out – often leaving a halo of conidia that can be seen on the glass surface of windows around where the fly remains. 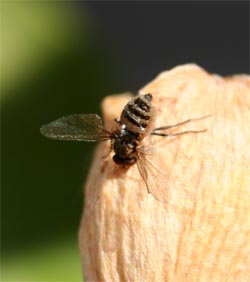 The characteristic pose of a fungus-infected fly, with wings outspread.

Once inside a fly, fungal hyphae grows into the fly’s brain, causing a distinct change in behavior, often called “summit disease.” Instead of acting normally, the fly crawls upwards as high as possible, going to the tip of the branch, flower, stem or leaf it is on. This behavioral alteration is also accompanied by formation of specialized fungal structures or glue-like materials secreted by the hyphae for attachment. The fly securely attaches itself by its extended proboscis to the surface it is on, where it may remain for days or even weeks. Before it dies, it spreads out its legs, stretches opens its wings above the thorax, and angles the abdomen away from the surface. The elevated location and distinct posture improves the chances that any fungal spores that are produced will leave the cadaver and infect new hosts. 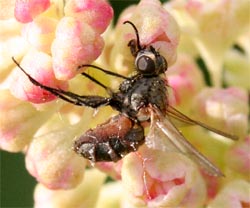 Dead flies remain stuck where they died by their proboscis.

Most flies die a few hours before nightfall. Since the fungus needs higher humidity, which typically occurs at night, for sporulation, this timing improves the chances the fungus will have the right environmental conditions to produce conidia. However, if conditions are not conducive for sporulation, the fungal holdfasts ensure the dead insect will remain hanging there for a while and the pathogen can persist in the infected host until conditions improve. 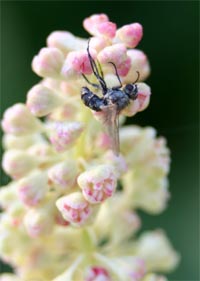 You will notice dead, fungus-infected flies on taller plants.

This fungus can also be transmitted in another way. Male house flies are attracted to dead female flies infected with the fungus, and can pick up spores when attempting to mate with the corpse. About 90% of such encounters result in infection. Before they die, infected males can mechanically transmit spores to female flies during mating, and matings between infected males and healthy females results in fewer viable eggs.

Epizootics (outbreaks) of this fly disease occur most often in spring and fall in temperate regions, when cool and humid conditions predominate.  At this time flies are more likely to be resting than moving about actively, making it more likely hosts will be infected, and conditions are right for fungal sporulation. 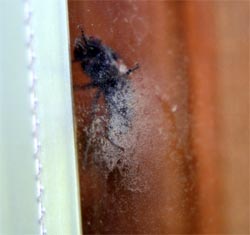 A shower of conidia can often be seen on the glass around dead flies on windows.

You will often see dead flies attached to windows, window frames, or other places flies aggregate indoors at this time. Outdoors, fly cadavers can often be seen on taller garden plants such as goldenrod, thistles, and phlox, on fences, or other structures. In midsummer the incidence of disease drops off dramatically.

In autumn, some infected individuals do not produce conidia when they die but develop overwintering fungal structures instead. These flies drop to the ground, where thick-walled resting spores are produced. These resting spores survive the winter in the soil and the next spring produce conidia that can infect flies.

Research into utilizing this fungus for biological control of flies continues, but the short life span of the conidia is one technical problem that must be overcome before it could be offered commercially.