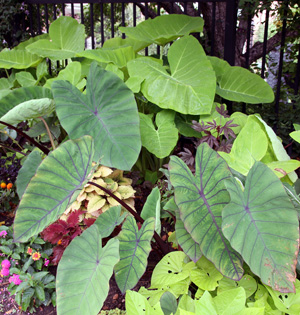 Elephant ears is the common name for a group of tropical perennial plants grown for their large, heart-shaped leaves.

“Elephant ears” is the common name for a group of tropical perennial plants grown for their large, heart-shaped leaves. Most of these herbaceous species in the arum or aroid family (Araceae) that are offered as ornamentals belong to the genera Colocasia, Alocasia, and Xanthosoma, although there are others that have similar appearance and growth habits. 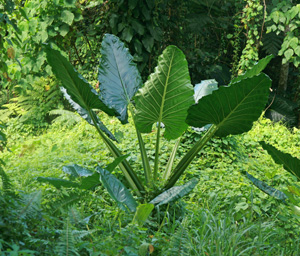 An Alocasia growing in Fiji along a roadside.

The first two genera are native to tropical southern Asia, Indonesia, Malaysia, New Guinea, parts of Australia, or the Pacific Islands, while Xanthosoma is native to tropical America. Many of the species have long been grown for the edible starchy corms or tubers as an important staple food in tropical regions.

The leaves are edible, but they (and all parts of the plant) contain needle-like crystals of calcium oxalate which are a skin irritant, so they must be cooked first. 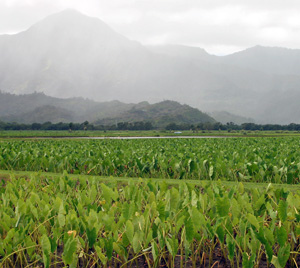 One of the most widely grown species is C.esculenta, called taro and many other common names. It has been cultivated in Asia and Polynesia for thousands of years, with over 200 cultivars selected for culinary or ornamental characteristics. This species naturalizes readily in wetlands in mild climates and is considered an invasive species along the Gulf Coast. 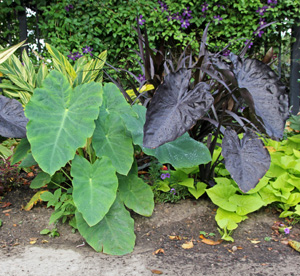 In cooler climates elephant ears are grown for their large leaves.

In the Midwestern garden these plants are grown for their flat sagittate (arrow- or heart-shaped) leaves that often have prominent veins. In their native habitat the smooth, waxy leaves will grow 3 feet long and 2 feet wide or more (depending on the species) but they tend to be much smaller when grown as a seasonal plant. 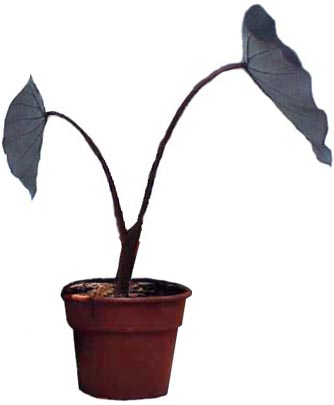 The leaves are held on the end of long petioles coming directly from the underground corm.

The leaves are held on the end of long, thick, succulent petioles coming directly from the underground corm. The petiole attaches near the center of the lower surface of the leaf (peltate) and the leaves are held perpendicular to the upright petiole with the leaves facing upward or outward. 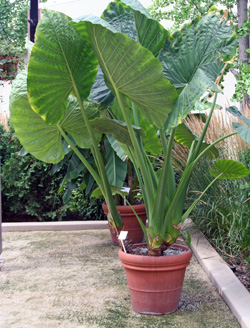 The leaves of Alocasia and Xanthosoma are usually not peltate and are held more upright.  These plants generally grow from corms (commonly called bulbs, although they are not true bulbs), 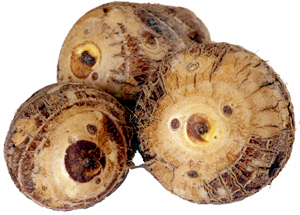 but some types also produce long, slender stolons (above ground runners), and others do not form corms. The lumpy corms with rough ridges have a brown skin and a white or pink interior. Some types of elephant ears also produce smaller tubers or “cormels” (also called “eddos”) which grow off the sides of the main corm.

Although elephant ears are grown primarily as foliage plants, they can bloom – but flowers are not common in the Midwest. The inflorescences are the typical aroid type with a white to yellow or light green spathe surrounding the spadix. They can be large, fragrant and attractive, but are normally hidden underneath the foliage. Fruits are globular green or yellow berries containing several seeds.

The flowers of Alocasia are a typical aroid type (L) with a white to green spathe surrounding a white or cream spadix (LC, C and RC), and may be followed by globular berries containing several seeds (R).

The standard emerald green C. esculenta, with a matte finish, used to be about the only type of elephant ear available to Midwestern gardeners, but over the past couple of decades breeding programs have produced a lot of new ornamental varieties. They vary in size from 8 inches to over 9 feet, but most are in the 3 to 5 foot range. Some of the many interesting cultivars available include (C. esculenta unless otherwise noted): 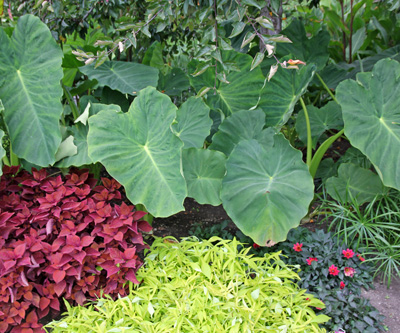 Use elephant ears to add a bold, tropical look to the landscape in borders, mass plantings or in containers. These fabulous foliage plants add dramatic contrast with both the size and color of the leaves and their form.  They combine well with other tropical plants such as bananas, castor bean, colorful caladiums, 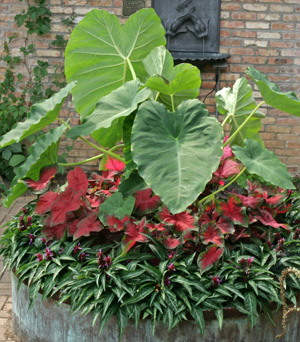 Chinese hibiscus and mandevillea, but they also provide wonderful textural contrast with more typical temperate bedding plants, ferns, or ornamental grasses. Pair dark-leaved varieties with any white, yellow, or orange-flowering plant for vivid contrast. The clumping varieties have an attractive vase shape so a single plant can provide an interesting focal point in the garden when planted in the midst of low-growing annuals such as petunias or begonias. Add them to large aquatic containers in combination with papyrus and water lilies or keep them in individual containers to mix and match with other plants on a deck or patio. 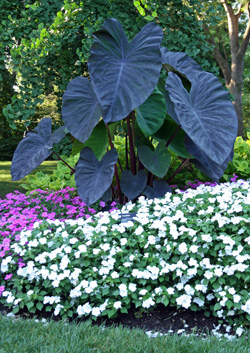 Many types of elephant ears can be grown in partial shade, but the darker colored varieties are best grown in full sun. All need rich, moist soil and nearly all are perfect at the edge of a pond. Most can be grown in a few inches of standing water, and can be added to water gardens as emergent plants (the roots in water and with the soil just covered with water, but the plants not submerged). 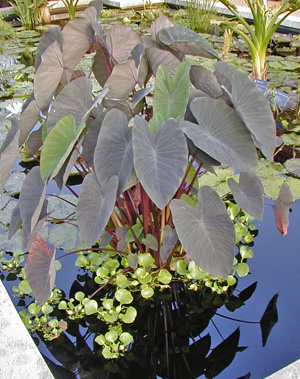 These tropical plants grow best in warm temperatures and high humidity. They may languish in Midwestern gardens until warm summer conditions begin, and they will also falter when temperatures drop below 50F for prolonged periods of time. 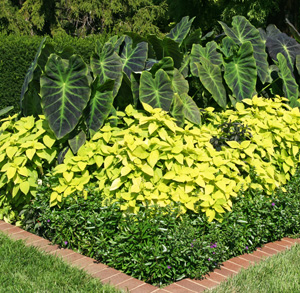 The plants continually produce new leaves throughout the growing season. The older leaves that gradually die off can be removed to keep the plants looking tidy. Be sure to consider the potential for the elephant ear to shade out smaller plants as they grow when you choose a planting location in the spring. 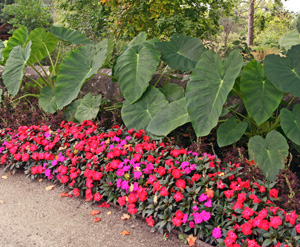 Provide lots of water and fertilizer to grow large plants.

Although they can be grown from seed, to grow large elephant ears, start with a large bulb or rooted plant (many of the newer cultivars are only offered as tissue cultured plants that have not formed bulbs yet). It will take a few weeks for the first leaves to appear from the bulb. These frost-tender perennial plants are best started indoors, potting up the bulb in March, placing the top of the bulb close to the soil surface, and keeping it in a warm location until it is planted outside when the weather warms up, usually in late May or early June. 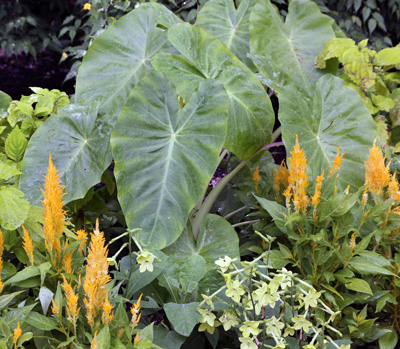 Elephant ears are best started indoors in early spring and placed outside when the weather warms up.

Provide copious water and fertilizer as the plants grow, especially for those in containers, as they are heavy feeders. For plain green-leaved elephant ears, you can purchase taro (also called coco yam) root in Asian grocery stores and grow it instead of eating it (if the corms haven’t been treated with something to prevent growth). 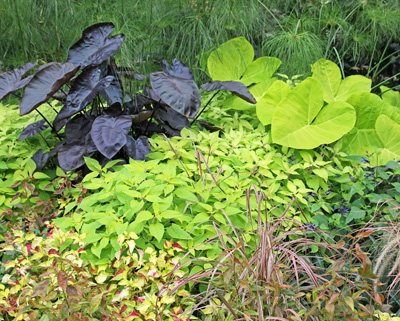 Although they are often treated as tender annuals, many types can be kept over the winter.

Elephant ears can be grown as annuals, starting with new plants each year, or may be kept over the winter (most are hardy only to zone 8). Plants that have formed bulbs can be dug, dried and stored like cannas or dahlias after frost has killed the foliage. 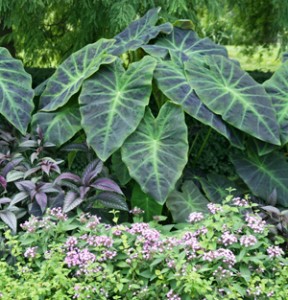 Illustris with other tender annuals. 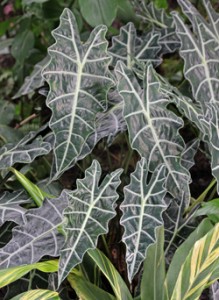 Those without bulbs are harder to keep indoors, although it may be possible to keep them going as houseplants if kept in a warm, bright location. It is best to bring plants to be kept as houseplants indoors before temperatures get into the 30’s. Cut back all but the top two leaves and keep at room temperature in bright light. Keep plants on the drier side when they are semi-dormant and resume regular watering and fertilizing when growth resumes in the spring.