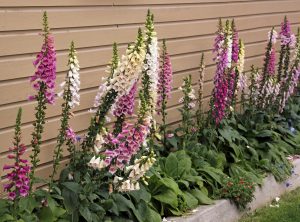 Common or purple foxglove is a European biennial plant which was the source of chemicals in the drug digitalis.

Common foxglove, Digitalis purpurea, is a biennial or short-lived herbaceous perennial from western Europe in the plantain family (Plantaginaceae, which now contains the former figwort family, Scrophulariaceae, this used to be part of) that grows in woodland clearings, mountainsides and especially on disturbed sites, as well as being used as a garden ornamental. 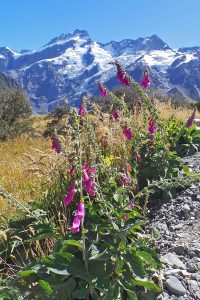 Purple foxglove is an invasive weed in many places, including in Aoraki Mount Cook National Park in New Zealand.

This plant, also sometimes commonly called purple foxglove, fairy gloves, fairy bells, lady’s glove, or many other things, is widely naturalized outside its native area, commonly near roads and in some places is considered a weed or invasive plant. It is hardy in zones 4-9.

This plant forms a tight rosette of simple, coarse leaves with prominent veins for a nearly quilted look in its first year.  The ovate to lanceolate leaves with barely noticeable rounded teeth on the margins grow on a winged petiole formed by the lower veins. The alternate leaves, up to a foot long, are covered with gray-white hairs that impart a downy texture on the upper surface and are wooly or hairy below. The clump remains low and close to the ground.

The plant forms a rosette of leaves (L and C) which have prominent veins (R).

In the second year an upright flower stem with smaller leaves is produced from the center of the basal clump. The spikes normally grow 3 to 4 feet tall with the individual flowers opening progressively up the elongated, terminal cluster (a simple or sparsely branched raceme). The species usually has a one-sided raceme with 20-80 flowers but improved cultivars often have flowers completely surrounding the stem. The downward-facing, tapered, tubular (bell-shaped) flowers have four lobes. Each 1½ to 2½ inch long pink, purple or white corolla (the fused petals) has long hairs inside and is heavily spotted with dark purple edged in white on the lower lip, which serves as a landing platform for pollinators. The flowers are visited by bees – primarily bumblebees – which climb deep into the flower tube to get the nectar which lies in a ring at the base of the tube, and in the process rub against the anthers which lie flat on the upper inside surface of the corolla. When visiting another flower, the pollen rubs off on the cleft stigma. Hummingbirds may also visit the flowers. The flower spikes can be used for cut flowers. 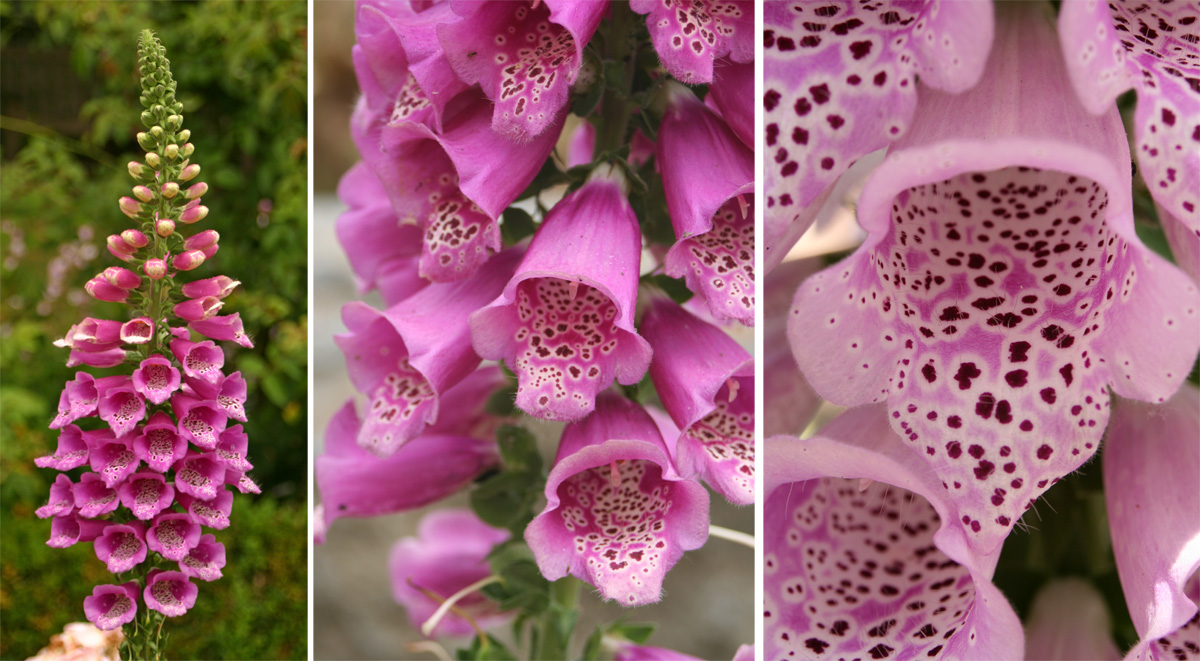 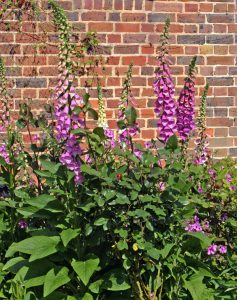 The main bloom time is in early summer but occasionally additional flower stems are produced later in the season, especially if the main flower stalks are cut after blooming. Pollinated flowers are followed by a rounded fruit capsule which splits open at maturity to release the numerous small brown, ridged seeds.Each plant can produce 1-2 million seeds which will readily self-seeding under favorable growing conditions. Deadhead after flowering to avoid excess numbers of seedlings but some flowers must go to seed to maintain a permanent planting as if they were perennials.

Use common foxglove to add a bold, vertical dimension to perennial flower beds, shade gardens, and cottage gardens, particularly in front of a solid background, such as a building, hedge or shrubs where they will really stand out. They also naturalize readily in woodland gardens. Mass plantings can be very effective. 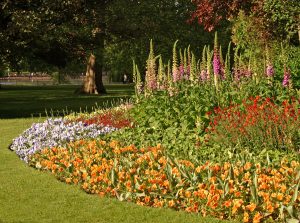 Use common foxglove in ornamental gardens to add vertical interest.

Grow common foxglove in full sun to light shade. Although it prefers light, moist soils high in organic matter, it will grow in almost any type of soil that is not too dry or too wet. Tall varieties may need to be staked to keep them upright. This plant has few pest problems and is not bothered by deer or rabbits, although powdery mildew can infect the foliage in late summer and will occasionally be infested with aphids. Plants can become rather ragged looking after they finish flowering, and could be removed from the garden, if desired. All parts of the plant are toxic if ingested and contact with the leaves can irritate sensitive skin.

Sow seed in late summer where plants are desired to grow to bloom the following year, or sow in late spring. Seeds need light to germinate, so do not cover. Thin the seedlings to about 18 inches apart. New seedlings can be easily moved while still small.

Common foxglove is naturally quite variable in size and flower color. There are a number of cultivars and a few hybrids commonly available, including:

Compounds in this plant have been used medicinally (historically and in more recent medical applications) but ingestion can be toxic and is not recommended.