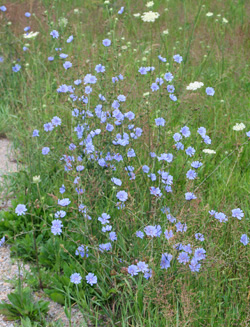 During the summer, you may notice pretty blue flowers painting many roadsides. The plant producing those flowers is Cichorium intybus, or common chicory. The name chicory is also sometimes used for another related plant, C. endivia, curly endive. Other common names for C. intybus include blue sailors, coffeeweed, cornflower, Italian dandelion, or succory. This herbaceous perennial native to Europe central Russia and western Asia has become naturalized over much of North America, and other parts of the world, surviving in zones 3-9. It is common along roadsides, railroads and in disturbed sites or waste ground and may be seen in poorly maintained lawns, pastures, and abandoned fields. It does not typically invade undisturbed natural habitats. 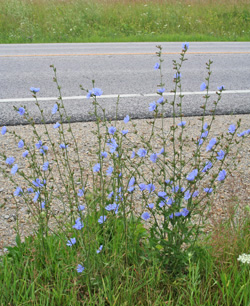 Chicory is common along roadsides.

This plant in the aster family (Asteraceae) has been cultivated for centuries for its leaves, buds and roots and was used medicinally. The young leaves of even the wild type can be eaten raw as a salad green with a very bitter taste or older leaves can be cooked to reduce the bitterness. Common names for the cultivated types (var. foliosum) include Belgian endive, French endive, radicchio, red endive, sugarloaf, or witloof. These are very different from the wild type and are not discussed in this article. The processed roots of the variety sativum are still used mixed with or as a coffee substitute in some parts of the world including the southern US, especially in New Orleans. The plant is also used as a forage crop in some parts of the world. Because of its toxicity to internal parasites, there has been some research investigating using this plant as a forage to reduce worms in livestock, especially sheep.

As a perennial, chicory produces only leaves in its first season. It resembles a dandelion (Taraxacum officinale) plant, with a rosette of lanceolate leaves 3-10 inches long. 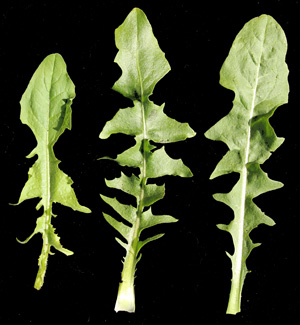 Variation in the lobes on chicory leaves.

The leaves are variable, ranging from irregularly toothed to deeply lobed. Unlike dandelion, the lobes are not always opposite one another and also are generally pointing away from the rosette. 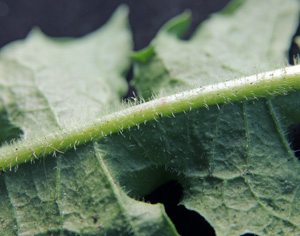 The underside of a chicory leaf is roughly hairy.

Some are smooth (glabrous) while others may be roughly hairy. Like a dandelion, it has a relatively large, brown, fleshy, branched taproot with a milky sap. 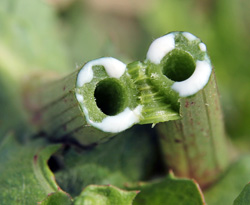 In its second and subsequent seasons this plant produces a tough, wiry, erect, branched flower stem with either a spike-like inflorescence or an open branching panicle. The rigid, somewhat hairy stems with milky sap grow up to nearly four feet tall under ideal conditions, although roadside specimens are usually shorter. The upper leaves growing on the flower stems are much smaller than the basal leaves and typically are without lobes and clasp the stem.

The leaves on the stems do not have petioles, but clasp the stems.

Numerous flowers are produced, with plants blooming from mid-summer until the first frost in the fall. Each sky blue, or occasionally pink or white, flower is up to 1½ inches wide, with numerous strap-shaped petals (ray flowers), each with 5 sharp teeth at the blunt apex, and no disc flowers. The ray flowers have blue anthers and blue and white bifurcate styles. There are two rows of bracts surrounding the flower heads, with the outer ones about half as long as inner ones. The flowers occur in clusters of 1-5 along the branches or at the tip of short branches. Each flower only blooms for a day; during hot weather they remain open only for a short time in the morning but on cooler or cloudier days may stay open nearly all day. Bees, flies and butterflies may visit the flowers.

The distinctive blue flowers of chicory have numerous ray florets, each with toothed blunt ends (L) and blue anthers and styles (C). The flowers are visited by many different insects, including bumblebees (R). 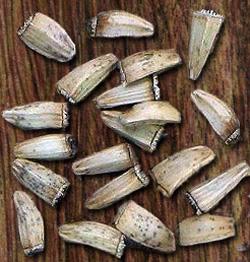 The mottled brown fruits or seeds (achenes) are oblong, with angled edges and blunt ends and a fringe of short bristles at the wider end. This species propagates readily from seed or pieces of roots. The seeds are much heavier than those of a dandelion and lack the feathery pappus that helps those seeds disperse on the wind, so this weed tends to occur where animals, machines, or other human activities move the seeds, rather than the random and ubiquitous distribution seen for dandelions.

When cultivated, it is best grown in deep, well-drained fertile soil to encourage leafy growth (for greens) and deep rooting (when grown for the roots). If it is grown intentionally in a garden, care should be taken not to let it escape (self seed). 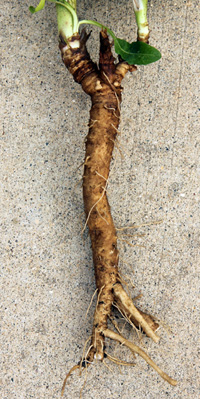 As a weed, chicory adapts to almost all well-drained soil types in full sun. In small gardens, hand removal – making sure to remove all of the root – is probably the best control option. Chemicals can be used but often just kill off the top growth of older plants without being translocated to destroy the root, so the plant later resprouts from the intact root. 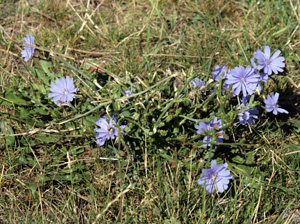 When repeatedly mowed off, chicory blooms close to the ground.

For chicory infesting lawns, mowing will cut off some of the leaves and the flowering stems, leaving hard stumps, but the plant will regrow from the tap root. Frequently mowed plants often end up with prostrate flowering stems not affected by the mower. Maintaining a thick, healthy lawn through proper mowing, fertilization and irrigation will prevent establishment of new plants. Broadleaf herbicides can be applied to kill chicory plants in lawns.