Matricaria chamomilla is an annual in the daisy family.

Matricaria chamomilla is one of several different species in the daisy family (Asteraceae) that have the common name chamomile. Also known as German chamomile or wild chamomile, it is one of two species commonly used for making the tisane (herbal infusion) called chamomile tea. M. chamomilla (syn. Matricaria recutita and Chamomilla recutita) is an annual native to southern and eastern Europe and western Asia that has been widely introduced in temperate areas elsewhere where it thrives in disturbed areas, meadows and fields. It is closely related to pineapple weed, M. discoidea (sometimes also called wild chamomile), a common weed of roadsides and gardens with edible flowers that exudes a pineapple aroma when crushed. It is easy to distinguish from M. chamomilla when in flower because the inflorescences lack ray flowers (the daisy “petals”). 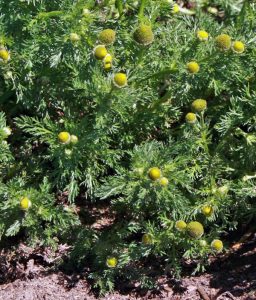 The shorter Roman, English or garden chamomile, Chamaemelum nobile, is a similar-looking perennial from western Europe hardy in zones 4-9. This evergreen species spreads by creeping, rooting stems and can be aggressive in good conditions. It is used less frequently since it has a more bitter taste than M. chamomilla. These plants are often confused with plants of the genus Anthemis, some of which are poisonous and have either a revolting smell or are nearly odorless. These genera can be distinguished botanically by the receptacle which is hollow in Matricaria and filled in Anthemis. 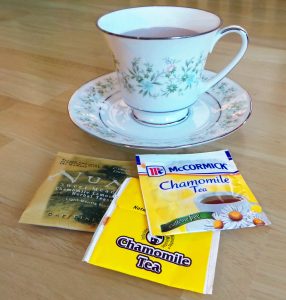 Chamomile tea is made from the dried flowers.

Chamomile tea, one of the world’s most popular herbal teas, is made from dried flowers of either plant steeped in hot water. Commercial tea bags of chamomile contain either pure chamomile flower powder or may be blended with other medicinal herbs.  Chamomile flowers can also be used to make a yellow-brown fabric dye.

The annual chamomile grows quickly from seed to produce erect, branched stems up to 2 feet tall. The thin roots are shallow and spreading. The alternate, sparse, finely divided (double pinnate) leaves are long and narrow (to 3” long). The foliage is aromatic but bitter tasting.

The plants begin blooming in early to midsummer, producing a prolific number of solitary terminal flowers until the seeds begin to ripen in late summer or until frost if deadheaded. As with other plants in the daisy family, the inflorescences of this plant are paniculate flower heads (capitula), each composed of a domed central cone of bright golden yellow tubular florets surrounded by 10-25 white ray flowers. The flowers have a strong, aromatic apple-like fragrance and are attractive to bees and butterflies. After the flowers are spent they are followed by yellowish brown seeds (achenes). Plants readily self-seed (unless all flower heads are removed). 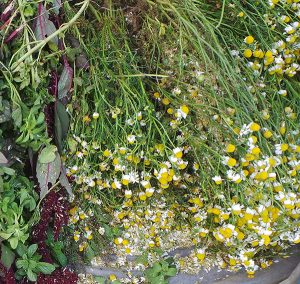 Harvest chamomile at near full bloom.

Harvest the flowers when they are near full bloom for best quality, snipping just the inflorescence from the stem. Flowers may be used fresh or dried. 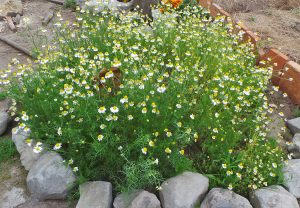 Grow chamomile as an herb or ornamental in full sun.

Chamomile can be grown as an herb in herb or vegetable gardens, or integrated into ornamental beds and borders. Grow chamomile in full sun and in well-drained soil. It will grow well in poor soils, so does not need much fertilizer and has few pest problems other than aphids. It is not preferred by deer. Since the plants are shallow-rooted irrigate as needed to keep upper levels of the soil moist but not wet. 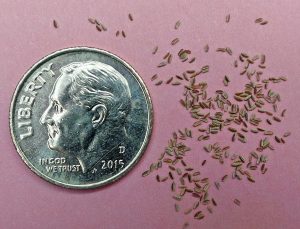 Chamomile is grown from the tiny seeds.

Chamomile is propagated exclusively from seed, either planted directly in the garden in fall or shortly before the average last date of frost or started indoors 6-8 weeks before the average last date of frost to be transplanted outdoors at last frost date. The seeds need light to germinate, so surface sow and just press into the soil rather than covering. Under warm conditions germination should occur within a week. Larger plants do not transplant well, so grow individually in containers or transplant when small. There are some improved cultivars which have been selected for high levels of essential oils in commercial production but are rarely available to gardeners.