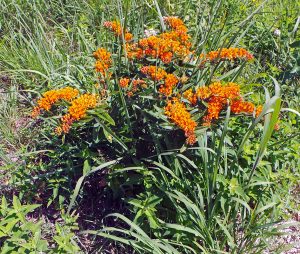 Butterflyweed is a long-lived herbaceous perennial in the milkweed family (Apocynaceae, formerly Asclepidaceae) native to much of North America except the northwest, from eastern Canada south to Florida, west to the Dakotas down to Colorado and the southwest, except Nevada, into California, but is most widespread in the eastern half of the U.S. With other common names including butterfly milkweed, orange milkweed, pleurisy root and chigger flower, Asclepias tuberosa is found in prairies and meadows, open woods, along roads and other open areas in zones 3-9. 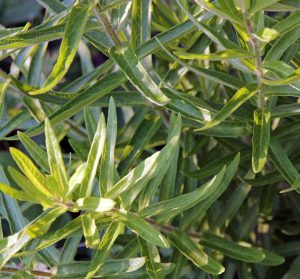 Butterflyweed has many narrow leaves on multiple ascending stems.

This bushy perennial grows an abundance of dark green foliage on multiple erect to ascending stems from a large taproot, forming a clump 1½ to 3 feet tall and wide. Its tough, woody, knobby root that can grow several feet deep was used medicinally by Native Americans. The lanceolate to oblong leaves are primarily alternate, often crowded together on the stout, hairy stems which are green to dull reddish-purple. Each leaf, up to 6 inches long, is sessile or with a very short petiole, pointed at the end and toothless on the margins. The upper surface is smooth and glossy, while the underside is finely hairy, especially along the veins, and lighter in color than the upper side. Unlike most members of the milkweed family, this species does not have milky sap. The leaves turn a dull yellow in fall before the stems die back to the ground for the winter. It is best not to cut the foliage back in fall but wait until spring. Plants are slow to emerge late in the spring.

Large, flat to slightly dome-shaped umbels (clusters) of up to 25 bright orange star-shaped flowers are produced at the ends of hairy flowering stems or in upper leaf axils from late spring through summer. Each 3/8 inch wide fleshy flower has 5 reflexed petals (corolla) and a 5-parted crown (corona) of 5 curved horns protruding from hoods arching over a short white to light green column in the center.

Flowers are produced at the ends of stems (L), with buds changing from green to orange (LC) to open along the stems (C) for a showy display (RC) of many small 5-parted flowers (R). 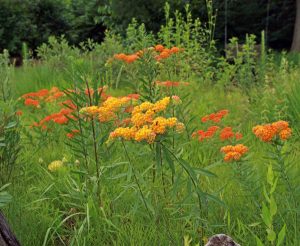 Flower color is generally orange but can vary from orange to yellow or red.

These are generally all orange but there are yellow or red cultivars (such as ‘Hello Yellow’ and ‘Gay Butterflies’) and naturally occurring populations, all usually with a yellow central column. Each cluster is 2-5 inches across, making an excellent landing platform for butterflies. There are also 5 hairy, light green sepals below the petals which are hidden when the flowers open. The flowers produce copious amounts of nectar so are very attractive to hummingbirds and many insects, not just butterflies, and can also be used as cut flowers. Deadheading may stimulate a second flush of flowers about a month later. 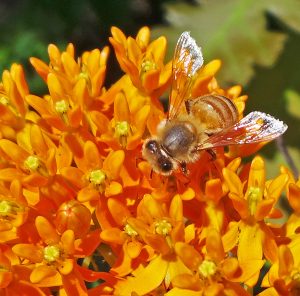 Butterflyweed is attractive to many pollinators.

Successfully cross-pollinated flowers are followed by prominent, erect, narrow, spindle-shaped seed pods covered in short hairs (the fruit is a follicle). The 3-6 inch long, grayish-green pods split open when mature to release rows of hundreds of flattened, brown seeds, each with a narrow wing along the margins and a tuft of long, silky hairs (a pappus) at one end that aids in dispersal by wind. Butterflyweed may self-seed in the landscape if plants are allowed to go to seed; remove the pods before they split open to reduce self-seeding. The seed pods can be used in dried floral arrangements. 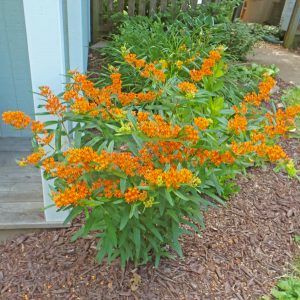 Butterflyweed can be used as a specimen plants in gardens.

This showy plant makes a great addition to home gardens, prairies, native plantings or for naturalizing, rain gardens, and butterfly gardens. They can be planted in masses or combined as an accent with other mid-sized perennials in the sunny border. The vivid orange color stands out, particularly in combination with blue or purple flowers but some find the intense color hard to blend in some landscapes. Try combining butterfly weed with blue morning glories, globe thistle (Echinops spp.), Penstemon digitalis ‘Husker Red’, or purple speedwells (Veronica spicata or hybrids) in a mixed garden. 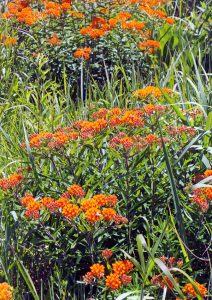 Butterflyweed is a great addition to meadows and prairie plantings.

It or works well with other native perennials such as yellow coreopsis (Coreopsis verticillata), purple coneflower (Echinacea purpurea), goldenrod (Solidago spp.), blazing star (Liatris spp.), black-eyed Susan (Rudbeckia hirta) and R.fulgida, and grasses such as little bluestem (Schizachyrium scoparium) or prairie dropseed (Sporobolus heterolepis) in a meadow or prairie. It is a larval host plant for several butterflies, including monarch (Danaus plexippus) and the related Queen butterfly (D. gilippus, although this species occurs primarily in Central America into the southern US but may occasionally stray into the Midwest), so you may want to position the plant in the landscape where won’t be an eyesore if it is eaten ragged by caterpillars. 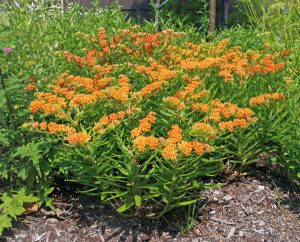 This plant needs full sun to bloom. Although it prefers sandy soil, butterflyweed grows in almost any type of soil, including gravel or clay, as long as it is well-drained. It is very drought tolerant once established. This plant is not favored by deer but is quite likely to be infested with aphids – most often the bright yellow oleander aphid with black legs (an introduced species native to the Mediterranean but almost cosmopolitan in distribution now). Small numbers of these insects will not harm the plant and many times are eaten by lady beetles or other predators. Large populations can be managed with insecticidal soap or reduced by knocking the insects off the plant with a forceful stream of water. Rabbits may eat the plants. 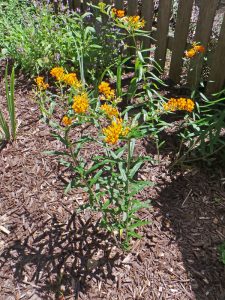 This species is easy to grow from seed, but can also be propagated from root cuttings. Cut the taproot into 2-inch sections in fall and plant in a vertical orientation. Plants will bloom from seed in 2-3 years, and do not transplant well because of the deep taproot. Sow outdoors in place after frost in the fall, in a cold frame in early spring, or start indoors with bottom heat in late winter (8-10 weeks before average last frost) after 1 month moist stratification to carefully transplant outside later. Using 3-4 inch deep containers, particularly with separate cells, will allow the roots to grow deeper and seedlings can be more readily transplanted without disturbing the roots as much.