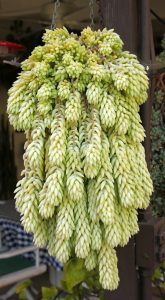 The common name burro’s tail comes from the resemblence of the trailing stems to an animal’s tail.

The genus Sedum is a large group with numerous species in the stonecrop family (Crassulaceae). Sedum morganianum is a tropical species that has long been grown as an ornamental for its distinctive, evergreen foliage. It has several common names including burro’s tail, donkey’s tail (also a common name for the hardy perennial Euphorbia myrsinites), horse’s tail, and lamb’s tail for the resemblance of the pendulous stems to an animal’s tail. Native to southern Mexico and Honduras, this long-lived tender trailing sub-shrub is generally grown as a houseplant in most parts of North America as it is hardy only where it remains well above freezing. It was given the Royal Horticultural Society’s Award of Garden Merit in 1993. 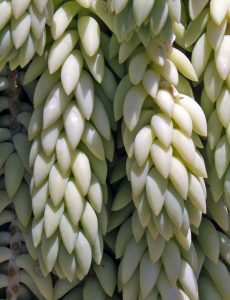 This tender perennial plant has trailing stems and succulent, blue-green leaves with a silvery bloom that rubs off when handled. The stems grow upright at first, eventually becoming pendulous and growing to four feet long; they can be rather heavy with all the water stored in the leaves. The smooth-textured, lance-shaped, overlapping leaves grow in a closely-whorled, almost spiraling pattern to completely surround the stem, creating an almost braided appearance. The short, thick cylindrical leaves are pointed on the end, and swell to become very plump when plants are well watered and will shrivel when too dry. The stems are brittle and leaves break off easily, so place the plant where it will not get inadvertently knocked or be damaged by passing people or animals. Areas on the stems where leaves are missing may produce branches. ‘Burrito’ (it is unclear whether this is another species, a cultivar, or a hybrid) or ‘Baby Burro Tail’ has smaller, more rounded, lime-green leaves on shorter stems.

Burro’s tail grown indoors rarely blooms but in summer, small but showy pink to red blossoms may appear in terminal clusters of 1-6 flowers on slender pedicels. The small, star-shaped flowers have bright yellow stamens and fleshy, lighter pink sepals. They produce abundant nectar and are very attractive to bees and flies. The plants must be mature with stems at least 25cm long before they will flower. Moving plants outdoors in summer and keeping them at cooler temperatures in the winter (50ºFs and 60ºFs rather than room temperature) may encourage flowering. 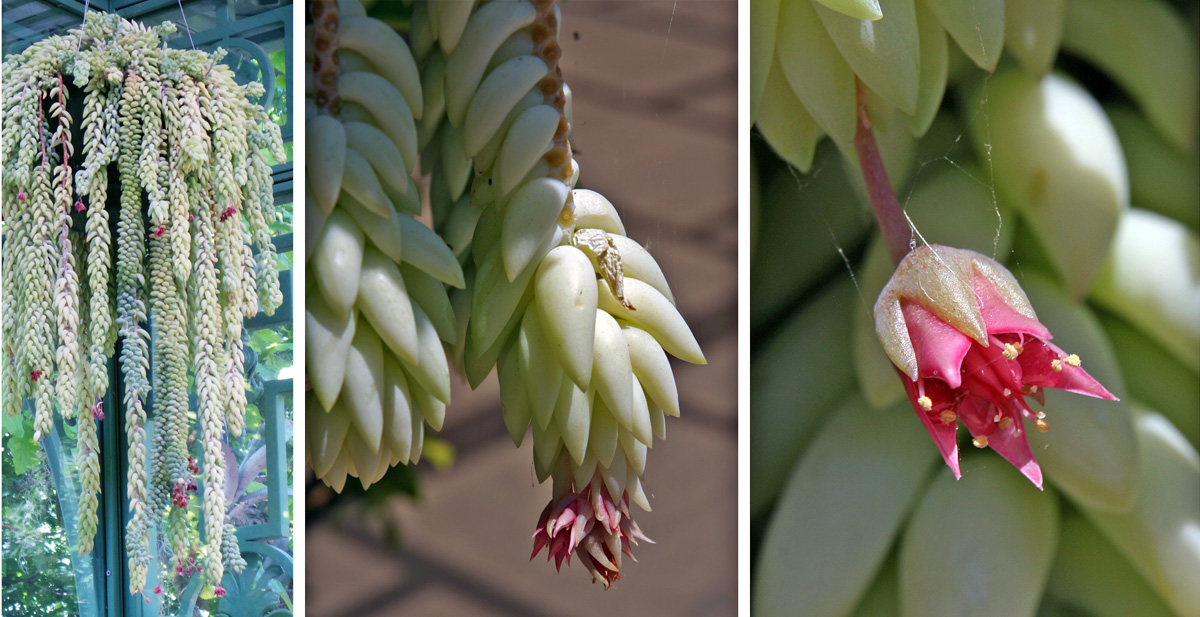 Because of its trailing stems, burro’s tail is best grown in containers where the stems can hang down vertically. Hanging baskets, urns, or large pots on pedestals all showcase the pendant stems. Fill a container shaped like a head to look like dreadlocks. Indoors where conditions are good, individual plants may last for decades. Outdoors they can be used as seasonal hanging plants where protected from strong wind. At Lotusland in Santa Barbara, CA there are several hanging baskets of these plants in a large spreading tree, each with a shade cover that makes them look like big jellyfish. 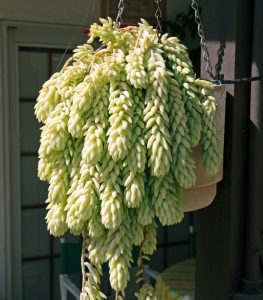 Burro’s tail grows best in bright light to full sun; in insufficient light the internodes will be longer so the leaves will not be as dense on the stems. In too intense light, the leaves bleach out and become yellowish instead of blue-green. It does best in a well-drained growing medium, such as cactus mix or regular potting medium liberally augmented with perlite, pumice, baked clay granules, or even small pea gravel (but not sand, which tends to fill the soil pores and hinder rather than enhance drainage). Fertilize lightly only once or twice during the growing season. Repot in the spring only when the plant has completely filled its pot as it does well when potbound. Wait about a week after repotting to water, then water sparingly until the plant is re-established. This plant has few pest problems (mealybugs occasionally infest the stems), and root rot due to overwatering is the most common issue. Wilting or soft leaves may indicate too much soil moisture. 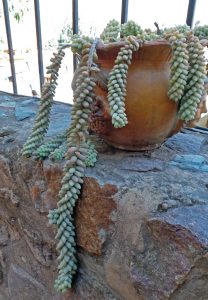 Burro’s tail is easily grown as a houseplant.

As a succulent, it cannot tolerate over-watering, especially when dormant in the winter. The soil should be allowed to nearly dry out between waterings. Water regularly during the growing season but reduce the frequency in the fall and provide just enough water during the winter to prevent the potting medium from drying out completely. Depending on the conditions, indoor plants may not need watering more than once a month. 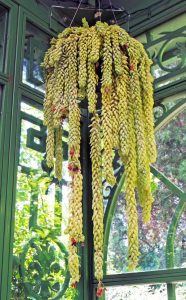 A container of burro’s tail in the solarium of the Woodland Mosaic at the Denver Botanic Garden.

Burro’s tail is generally grown as a year-round houseplant in the Midwest, but the plants can be moved outside for the growing season once temperatures are consistently above 40ºF. They need to be gradually acclimated to the brighter conditions outdoors or will sunburn. Move the plants back indoors in the fall when nighttime temperatures are predicted to go below 40ºF.

Sedum morganianum is easily propagated from stem or leaf cuttings. Roots will develop from individual leaves removed from the stem but it will take longer to regenerate a plant of some size than from stem cuttings. For stem cuttings, strip the leaves from the lower end of a cut stem, allow it to dry for a day or two, then push the stem ends down into the rooting medium. Long or heavy stem cuttings may need to be secured with pins or stakes to keep them in place until the roots develop enough. It may take several months before plants root well. This species can also be grown from seed or divisions.