Black-eyed Susan vine is commonly grown in the Midwest as a season annual to provide color in a vertical setting. This plant, Thunbergia alata, is actually a tender evergreen perennial in the acanthus family (Acanthaceae) native from tropical East Africa to eastern South Africa that is hardy only in zone 9 and 10 (and is completely unrelated to Rudbeckia hirta, an herbaceous annual or short-lived perennial in the daisy family (Compositae) native to north America, also commonly called black-eyed Susan). Because it grows and flowers relatively quickly it is often used as an annual ornamental garden plant in cooler areas. It should be used with caution in frost-free areas as it has become invasive in many warm locations throughout the world.

This trailing or twining vine grows rapidly from seeds, reaching up to 8 feet in a single season under ideal conditions, but more often only 3 to 5 feet in the 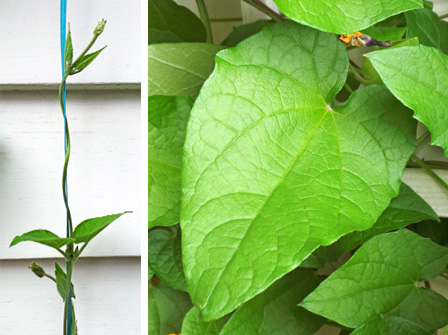 This vine grows by twisting around supports (L) and has heart-shaped, softly hairy leaves (R).

Midwest (and much more in frost free climates). The plant is a rambler, climbing by twining (growing in a spiral up a support) rather than by clinging or producing tendrils as some other vines do. The opposite, oval to triangular or heart-shaped leaves grow up to 3 inches long on winged petioles. They are soft and hairy, dull dark green on the upper surface and pale green with prominent veins below, with slightly toothed margins.

Showy flowers (RC, from side and R from front) emerge (LC) from hairy bracts (L).

Pollinated flowers develop a fruit (LC) enclosed in the green bracts (L), which ripens and dries (RC) to a tan color.

Plants bloom from mid-summer to frost, often with the best display in late summer. The species typically has brilliant orange flowers, but there are cultivars in pastels and white as well. Butterflies, bees and hummingbirds will visit the flowers. 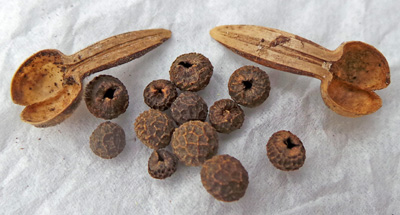 Each fruit releases a number of reticulate seeds.

Seeds are often produced late in the season. The fruit resembles a bird’s head with a round base and a long ‘beak’. Each fruit contains 2 or 4 semicircular, reticulate seeds. 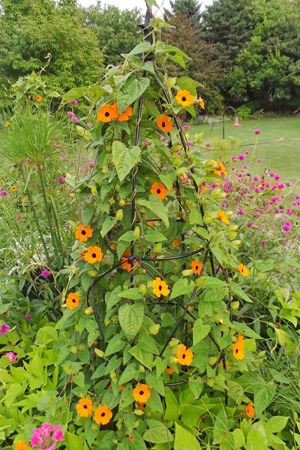 Black-eyed Susan vine does best when allowed to grow on some sort of support structure instead of just rambling through adjacent plants, although it can be used as a ground cover. It makes a dramatic focal point when grown on a tall tuteur or other decorative support in a border or bed, will cover a fence, arbor or trellis along a wall for decoration or to create a quick privacy screen, and will 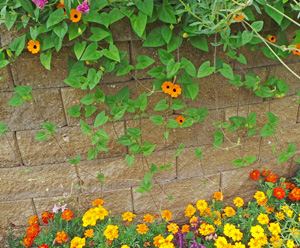 This vine will cascade down walls or from hanging baskets in addition to climbing.

cascade from a hanging basket (as well as grow up the hangers). Try combining black-eyed Susan vine with other aggressive vines such as morning glory or purple hyacinth bean. The orange or yellow flowers would contrast nicely with purple or blue flowers, such as salvia or ageratum, or purple-foliaged plants (such as Persian shield or purple heart) planted adjacent to the vine’s trellis. Use hot-colored flowers such as tall red zinnias, orange marigolds, or bright yellow celosia for a completely different look. 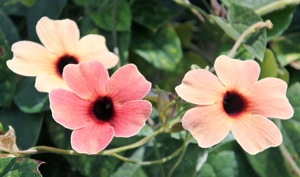 Or combine them with bright red cannas and large elephant ears for a tropical look. 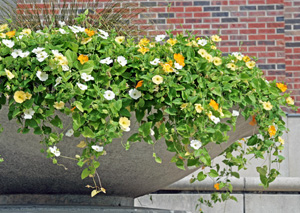 White, orange and yellow Thunbergia alata in a large container.

This vine can be used in a large container with a small trellis, and can be grown as an indoor plant (although it will likely need to be trained and pruned to keep it at a manageable size). Plants in containers will bloom over winter if kept in a sunny place and night temperatures are above 60 degrees. 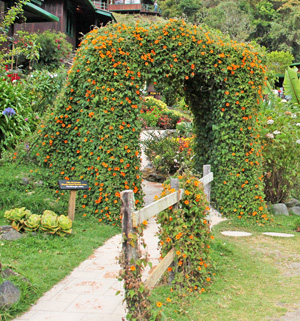 In frost-free climates this vine is perennial and will grow very dense.

The vine will quickly fill narrow vertical spaces with color.

Thunbergia alata grows best in rich, moist soil in full sun. It tolerates partial shade but flowering may be reduced. Seed can be sown directly where the plants are to be grown once soil temperature reaches 60F in the spring, but transplants give better results in the short growing season of the upper Midwest. Plant near the trellis, fence, or other support structure, 14-16” apart. Fertilize every 2 to 3 weeks when in bloom if grown in containers. Outdoors blackeyed Susan vine has few pest problems, but if grown indoors it is readily infested by spider mites and whiteflies. 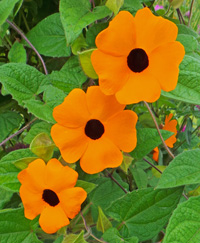 Black-eyed Susan vine is most often propagated from seed.

This plant is most commonly propagated from seed (although softwood cuttings can be taken or stems layered, too, but plants grown from seed tend to be more vigorous). Start seeds indoors 6 to 8 weeks before the average last frost, and plant outside once all danger of frost has passed and night temperatures remain above 50F. Soaking the seeds in warm water overnight before sowing will speed germination. Press the seeds into the soil, covering completely. Seeds should germinate in 10-21 days. Plants grown in containers can be overwintered indoors in a warm, very bright room. 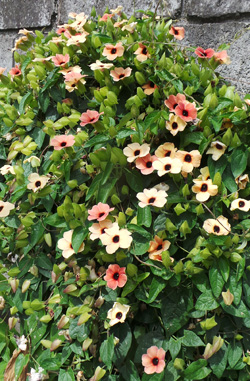 There are many different.cultivars available.

Often just the basic orange type is offered for sale as plants or seeds, but there are many cultivars. Some of the more common or interesting ones available include: