At the end of 2019, 72 Master Gardener Volunteers reported 3,720 hours of volunteer service for an estimated value of $89,288 (Independent Sector).  They also reported 943 hours of continuing education and reached an estimated 36,629 individuals with various outreach projects.

Eight Master Gardener Volunteers, staff from the Brown County Library, and volunteers of the Library collaborated for the Cellcom Children’s Edible Garden project at the Central Library Branch in downtown Green Bay. From mid June to the end of August,  times were scheduled for children’s or general public activities in the Garden. These events generated about 450 visiting children and adults. The Master Gardeners were the hosts of the 19 Tuesday evening activities with about five personal contacts made each evening. Produce from the Garden was picked by project volunteers and given to library patrons or Paul’s Pantry (a local food pantry). The pantry received over 99 pounds of tomatoes and leafy green vegetables from the Garden.

The team also hosted a community harvest on September 14 and about two dozen guests of all ages visited the Garden. The project received local and national recognition in 2019 by being nominated for a Brown County group volunteer award and cited in an American Library Association publication. 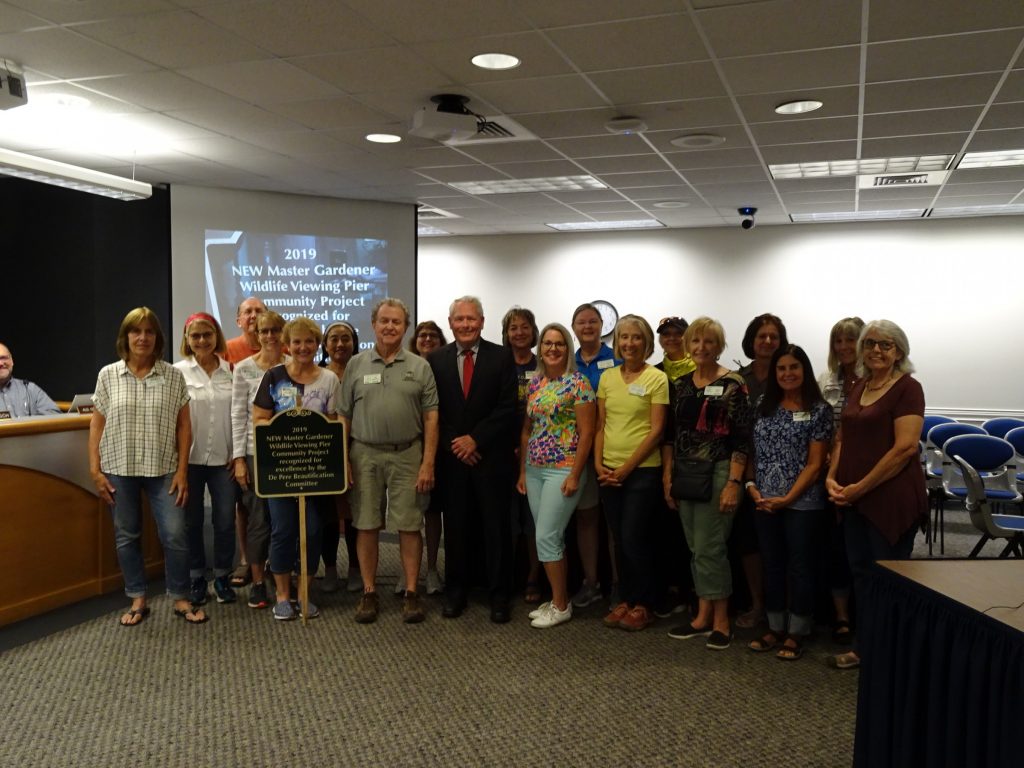 Brown County Master Gardener Volunteers were presented with a plaque by De Pere Mayor, Mike Walsh, and the De Pere Beautification Committee for their work with developing native plant gardens at the wildlife viewing pier and river walk.

Six Master Gardener Volunteers grew and provided nearly 500 pounds of produce for the community food pantry at St. Mark’s Church in De Pere. This year the church’s preschool students were involved in seed starting. Visitors to the garden were also able to observe the garden practices of using cover crops, vertical gardening, crop rotation, and lasagna gardening in the raised beds of the project.

This year was the first year the Master Gardeners partnered with the Green Bay School District’s Head Start Program (located at the former UW-Extension building in Green Bay). Six Master Gardener volunteers planned, planted, and tended to a variety of plants (pumpkins, gourds, popcorn, rainbow carrots, potatoes, drying beans, cantaloupe, and sunflowers). After students returned to school in Fall, approximately 180 of the Head Start students were able to spend time with the volunteers to learn how plants grow, help harvest, and taste the produce. For many of the students, this was the first time they saw how their food was produced.