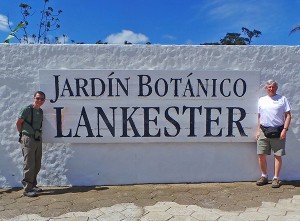 Gustavo and Dan flank the entrance sign to the Lankester Botanical Garden.

On the last day of the tour, we started the day at Jardín Botáníco Lankester. This garden, maintained by the University of Costa Rica, is internationally known for its collections of epiphytes, especially orchids.  The orchid collection includes over 15,000 accessions from nearly 1,000 species, most of which are native to Mesoamerica. We saw many orchids growing on the trees outside and inside the orchid showhouse where many large species and hybrids in bloom were artfully arranged among ferns and other tropical plants.

There were several plants of the guaria morada (Guaranthe skinneri), the national orchid of Costa Rica, in full bloom with their purple cattleya-type flowers with a white throat.

From there we wandered through the extensive collection of miniature orchids that filled the steel mesh benches in small pots and mounted on small wood or bark blocks hung on upright mesh frames all along the perimeter of the huge shadehouse.

You had to look really closely to see some of the very tiny flowers in an amazing array of bizarre shapes and interesting colors.

B’Ann smells the flower of Bulbophyllum imbricatum while Maureen waits her turn (L), Cindy photographing the brown inflorescence (C), and closeup of the flowers (R).

We could have stayed there for hours looking at the immense number of unique species, but had to see the rest of the garden.

We went back outside to walk the main trail through the Garden, stopping periodically to look at interesting plants. We went by a small pool filled with water lilies and a series of small waterfalls and backed by tall bamboo, then on through some landscaped areas to the small bit of remnant forest. We stopped in the shade to talk about some of the plants there, including orange-blooming Stromanthe lutea, a variegated-leaf Marantha, colorful terrestrial bromeliads, and white-flowering Amazon lily (Eucharis grandiflora).

From there we left the comfortable shade for the brilliant sun of the succulent garden. Dan was our interpreter here, telling the group about the huge Pereskia tree (a type of true cactus with spines and regular leaves) with a few pink flowers, some of the African euphorbias, and the colony of Stapelia gigantea, from Africa, with its giant red-striped yellow flowers with a slight stinky smell to attract its carrion fly pollinators. A green spiny lizard tried to mimic the leaves of the tall euphorbia it was perched in. The same plant was host to a number of bromeliads and orchids, sticking out among the spiny stems.

Other areas included exotic gingers – almost none in bloom however – or ferns or bromeliads or heliconias in bloom. As we went under the tall Heliconia longa, Gustavo pulled out one of the very long, curved flowers barely sticking out of the bracts that are pollinated by the white-tailed sicklebill (a type of hummingbird whose beak has just the same curvature as the flowers). The red pendant inflorescences hung down many feet from the tall plants.

In late afternoon we headed from Cartago to area of Tres Rios to the private home of Ms. Ileana Terán. The Terán family has owned and farmed the land for 160 years. The area has been heavily encroached upon by development and urbanization, and is now the single remaining coffee farm in the San Jose area. There are still 200 hectares of land in coffee, but the family is gradually developing the land because the land is more valuable than the coffee. Before heading up to her house, we stopped briefly on the roadside to look at the coffee plants there. The shrubs with glossy green leaves were still in bud (we’d seen plants elsewhere in full flower) and the harvest had been completed already, but we did find a couple of fruits. Susan cut them in half to show the 2 seeds, called “beans” that are processed and roasted to become the basis of the beverage we drink.

Ileana Terán has been interested in gardening and plants since she was young, and has long been an advocate for the protection of Costa Rica’s natural areas in general, and orchids in particular. She is a founder of the SACRO Foundation, an organization to protect these plants in their natural habitats. The Terán home overlooks the city and is beautifully landscaped, with a magnificent orchid collection throughout the grounds as well as in special shade houses and greenhouses.

Purple bougainvillea and orange flame vine frame the view from the front terrace of the Teran home (L), a huge Alcanterea (= Vriesea) imperialis in front of the pool (LC), a slope covered with terrestrial bromeliads and ferns (C), a blooming begonia (RC), Miltonia orchid flowers (R).

She hosts groups such as ours to discuss her conservation efforts and to help raise funds for their projects. Ileana graciously led us on a tour of her lovely gardens,

Ileana leads the group through the garden (L), tells Maureen and Carol about some of the miniature orchids (RC), Masdevallia orchid flowers (C), the group in the garden (RC), Dendrobium fimbriatum (R).

In the large orchid greenhouse (L), Carol photographs Maureen under the hanging flowers of Thunbergia mysorensis (LC), Dan photographs an oncidium orchid (RC), Ileana telling the group about some of the plants in the garden (R).

showed us a video produced by the SACRO Foundation (watch it yourself on YouTube) then served us homemade tamale appetizers and sangria, before we sat down to our farewell dinner, for a wonderful end to a wonderful tour.

Watching the video in Ileana’s living room (L), the group at dinner (C), a group picture with Ileana (R).