The Master Gardener Program in Ashland County started in 1992. Over 160 people have been trained since that time, and there are currently 13 certified Master Gardener Volunteers (MGVs) for 2016. The UWEX Educator facilitating the MG Program is Horticulture Educator Matt Cogger. 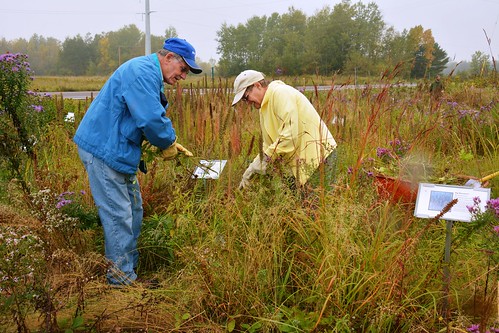 MGVs worked to restore and improve a central park area in Ashland overlooking Lake Superior where residents and tourists frequently walk or ride bicycles. They planted many perennials and shrubs to provide year round color and interest. Funding for the plants and shrubs was provided by the City, the Ashland-Bayfield MG Association, and donations from local citizens. Native shrubs, grasses and perennials were added to attract butterflies, birds and pollinators as well as educate the public on native plants. Plant markers have been added. Many favorable comments have been made on the beauty of the park and how it has become the “heart of the City” again since it was constructed 6 years ago.

A MGV cut and sprayed purple loosestrife along roadways, and at the marina and marsh on Madeline Island, as well as educated citizens on how to identify purple loosestrife, the importance of cuƫng back blossoms (bagging and burning) and providing some control through spraying. The MGV also worked on a project to identify and control buckthorn on the Island, again educating about identifying and controlling buckthorn. Many said they did not realize how out of control the buckthorn was.

MGVs purchased a tri-fold display board, and planned and designed the display. Through photos, word and artistic expression, they highlighted the purpose, details of experiences, actions and activities of the MG group. The display was unveiled at the Farm & Garden Show and Dairy Breakfast this past March to inform the public about the MG program.

* using the current estimated dollar value of volunteer time in Wisconsin of $22.24 per hour, from Independent Sector. Cumulative value based on previous annual estimates.

Where you can find activities by MGVs in Ashland Co.