Today we visited two natural areas adjacent to the Indian Ocean, with the plants influenced by the sea. In the morning we went to Robberg Nature Preserve and Marine Protected Area and in the afternoon visited Ttsitsikamma National Park. At Robberg, a rocky headland situated on a peninsula south of Plettenberg Bay, the mountain fynbos has been stunted by wind-driven salt spray and shallow soils. At Tsistikamma, a Khoi word meaning “place of sparkling water”, there is coastal fynbos, mountain fynbos and temperate forest in this 50 mile long park. At both locations we hiked for several hours through the indigenous habitats, and later stopped on the roadside for a short while, looking at the incredible diversity of plants, and a few animals there.  When we first started out at Robberg we quickly spotted the succulent, bright red leaves of Crassula atropurpurea on the rocks, and the red-edged discs of Cotyledon orbiculata nearby.

Soon it was a frenzy of discovery, with one plant after another, most of which we had no idea what they were. Snap, snap, snap went the cameras as we recorded the flowers, leaves, and plants to hopefully aid in identification later (but with SO many species in South Africa it would be a daunting task, not completed until much later, if at all, for some specimens). 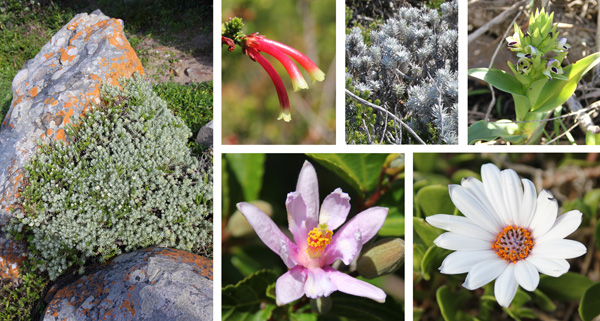 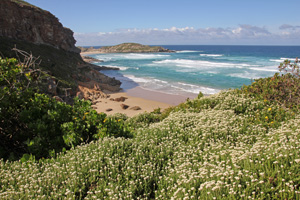 View of the Indian Ocean from the trail at Robberg.

There were a few things we recognized, such as asparagus fern (a houseplant back home, but here a thorny, rambling plant threaded through the other vegetation) and a Carissa bispinosa, a relative of natal plum (Carissa macrocarpa, grown as a landscape plant in Southern California) with smaller flowers.  Way below water crashed on the rocks and a few birds flew around in bright sunshine and strong wind as we made our way on the rocky trail hugging the steep slope going along one side of the peninsula, down to the beach at one point, and then back up onto the high ground and along the other side of the peninsula. Some of the plants were widespread, while others were more restricted based on the exposure or soil type. We saw legumes, ericas, lots of different succulents, and even found one terrestrial orchid. 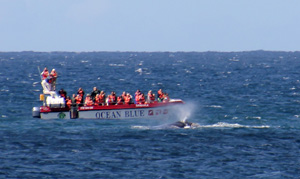 A southern right whale spouts near the whale watching boat.

After lunch – during which time three people it the group went on a short whale watching tour, seeing several southern right whales up close which the rest of us could just see from shore – we experienced a very different habitat, but also filled with a variety of plants. In Tsitsikamma we hiked under a high canopy of indigenous trees, including many of the yellowwoods (Podocarpus  spp.) and milkwoods (Sideroxylon spp.), twisted lianas dripping from the tall trees, a carpet of agapanthus plants (not in bloom) on the forest floor in one area, a clump of streptocarpus near a stream, and lots of non-descript green vegetation.

In more exposed places there were other interesting plants, including Helichrysum petiolare, a soft, vigorous shrub used by the Khoikhoi as bedding because of its resiliency even when dried; a prickly, purple-flowered solanum (Solanum linnaeanum); and calla lily, Zantedeschia aethiopica.

And of course there were lots more things we couldn’t ID either, plus a little fauna: a brief sighting of a Kynsna turaco (or lourie) and several cape hyrax.

As we left the park, we made a stop along the roadside to look at the pink and white Erica shrubs,

and of course discovered all sorts of other neat plants, including sundews, pelargoniums, restios, and many others – once again things we couldn’t identify. There are just too many plants in South Africa to know them all or even find them in the field guides!